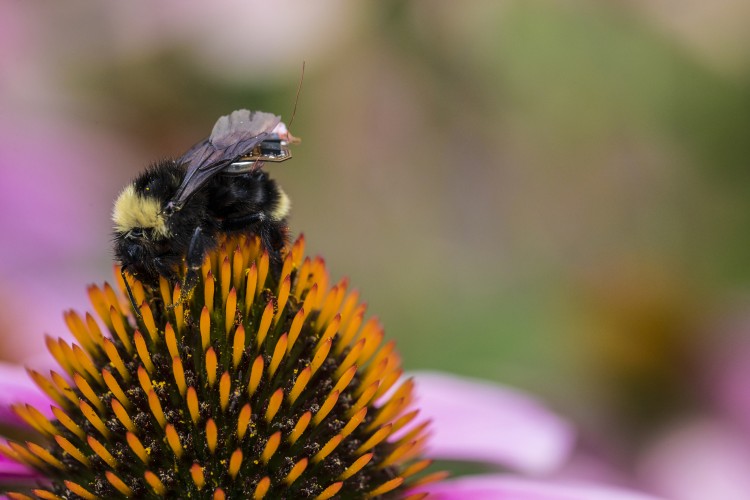 The sensor backpacks are light (roughly 0.0035 ounces) enough to be carried around by bumblebees, collecting data for seven hours at a time while traveling distances that are relatively long. To wirelessly recharge and to transmit the data it collects, the bumblebees would simply have to fly back to their hives.

“Drones can fly for maybe 10 or 20 minutes before they need to charge again, whereas our bees can collect data for hours,” said senior author Shyam Gollakota, an associate professor in the UW’s Paul G. Allen School of Computer Science and Engineering. “We showed for the first time that it’s possible to actually do all this computation and sensing using insects in lieu of drones.”

Most challenging for the University of Washington team was determining a method for tracking the bees instead of using power-depleting GPS. To overcome that challenge, the researchers erected several broadcasting antennas, making it possible for the bumblebee backpacks to triangulate their positions using signal strength and angle difference. Using backscatter, reflecting radio waves from neighboring antennas, the insects were able to send their collected data.

“The rechargeable battery powering the backpack weighs about 70 milligrams, so we had a little over 30 milligrams left for everything else, like the sensors and the localization system to track the insect’s position,” said co-author Rajalakshmi Nandakumar, a doctoral student in the Allen School.

Although the backpacks are only capable of storing roughly 30 kilobytes (KB) of data, which limits them to gathering basic information such as humidity, temperature and light, researchers see the value in their size in terms of noticing things that soaring drones might not.

Likewise, it is not possible to control the backpack-carrying bumblebees as it is to control drones. Yet, researchers hope that the backpacks will soon be outfitted with more sophisticated data-gathering technology in the future, possibly enabling controllers to instruct the backpacks to collect data only when flying over designated areas.

The ultimate vision of University of Washington researchers is to see entire farms where bees are employed to check crops.

“Having insects carry these sensor systems could be beneficial for farms because bees can sense things that electronic objects, like drones, cannot,” Gollakota said. “With a drone, you’re just flying around randomly, while a bee is going to be drawn to specific things, like the plants it prefers to pollinate. And on top of learning about the environment, you can also learn a lot about how the bees behave.”

By posting a comment you confirm that you have read and accept our Posting Rules and Terms of Use.
Advertisement
RELATED ARTICLES
Common Pesticide Damages Honey Bees Ability to Fly
Walmart May 'Employ' Robo Bees to Pollinate Crops
Watch: Moth-killing drones to protect greenhouse crops
Recording Buzz Activity of Bees May be Key to Saving Their Dwindling Population
Discarded Office Chairs Now Repurposed Backpacks
Advertisement