Wind Turbine Blades with a Twist Are Undergoing Tests

Three innovative 20 meter long rotor blades with a novel bend-twist coupling will be tested over the next four months in an effort to learn how effective the blades are at dampening peak loads during strongly variable wind speeds.

Rotor blades equipped with bend-twist coupling are able to adapt to variable wind conditions by themselves; at higher wind speeds the blades can bend or twist, thus offering the wind a smaller impact surface. 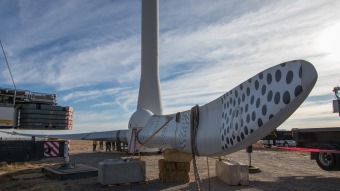 Wind blades on site at the NREL facility in Colorado. Source: NREL by Lee Jay FingershThe smaller surface is intended to reduce the overall load on the system, potentially increasing the wind turbine's life and its power yield. In order to fully capture the structural and aerodynamic behavior of the blades during the field experiment, the project partners integrated measurement systems into the blades’ structure.

The blades, developed as part of the SmartBlades2 project, were designed by the Fraunhofer Institute for Wind Energy Systems and built by the German Aerospace Center. They will be tested at the U.S. Department of Energy's National Wind Technology Center, part of the Colorado-based National Renewable Energy Laboratory.

The SmartBlades2 project is funded by the German Federal Ministry for Economic Affairs and Energy and is being carried out by the Research Alliance Wind Energy, with partners DLR, Fraunhofer IWES and ForWind. Industry partners include GE, Henkel, Nordex Acciona, SSB Wind Systems, Suzlon, Senvion and WRD Wobben Research and Development.

Inside the rotor blades, systems will continuously control how the blades behave under the diverse wind loading conditions the turbine will test. The turbine’s tower and the nacelle, made available by NREL, are also equipped with measuring technology, enabling the team to measure the whole system’s behavior in detail. 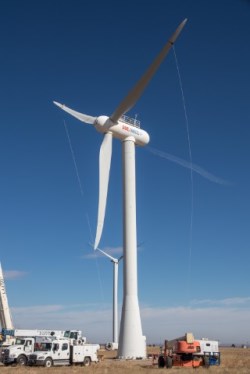 Blade installation at the NREL facility. Source: NREL by Lee Jay FingershThe resulting measurements will be correlated with data on wind conditions, which will be recorded by NREL data acquisition systems and a Spinner lidar (light detection and ranging) measurement device. This lidar is normally installed in the spinner of a wind turbine. For the NREL tests, the device will rest on top of the nacelle to analyze the wind field both in front and behind the turbine.

Researchers said that comparing the structural behavior measured by the sensors with the wind data will show whether the rotor blades achieve the desired behavior.

On site — at the edge of the Rocky Mountains northwest of Denver — the wind conditions can range from very low speeds to powerful gusts in winter and early spring. This will make it possible for the researchers to assess the SmartBlades2 rotor blades under a variety of environmental conditions.

Design validation will start with data analysis while measurements are still being conducted, and will continue until the autumn of 2019. The project is intended to help support the wind energy industry in developing rotor blades with bend-twist coupling and may pave the way to implement this technology.

By posting a comment you confirm that you have read and accept our Posting Rules and Terms of Use.
Re: Wind Turbine Blades with a Twist Are Undergoing Tests
#1

The opposite but like effect of a automobile flex fan behind the radiator. At high rpm the blades flatten to reduce load on the motor. In this case they they twist to shed the force of the wind preventing over driving of the system. Albeit this much more sophisticated and on a grand scale. Like setting the perfect trim on a set of sails, with the right feedback loops, it should smooth the load by providing a more consistent rotation.

Speaking of Grand Scale; I'd love to see a review of the Solar Wind Energy Tower Inc. 400' Smokestack pilot plant! Sounds like they are on to something. Their full size goal is one close to 2000' tall. Wow!