3D Printing: The Future of Manufacturing

3D printing has been a popular technology for several years. Almost every industry can benefit from 3D printing, from manufacturing to medicine. Read on to learn about the history of 3D printing and why it is a key technology in the present and future of manufacturing.

3D printing started just a few short decades ago, with early technologies arriving during the 1980s. In 1984, Charles Hull filed a patent for a stereolithography apparatus (SLA). This device uses an ultraviolet laser to etch a shape into a vat of photopolymer resin, which then builds upon itself layer-by-layer. 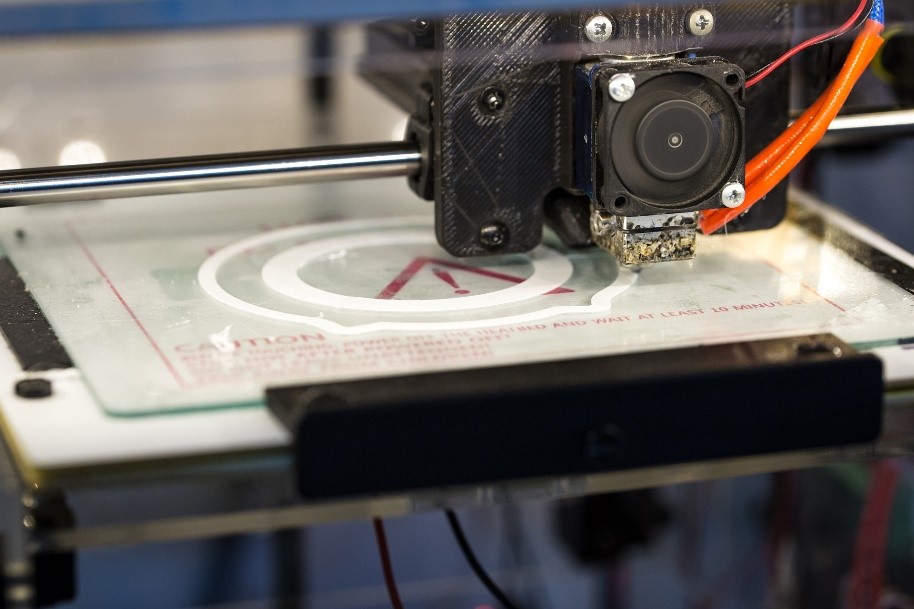 Figure 1: A 3D printer in action. Around that same time, Carl Deckard developed selective laser sintering (SLS), which works similarly but is based on powder materials rather than liquid. S. Scott Crump put the stereolithography file format to work in plastic with his fused deposition modeling (FDM) technology, patented in 1989.

Then in 1993, the Massachusetts Institute of Technology developed ZPrinting — an inkjet-based, powder printing process that added the vertical Z-axis to traditional X and Y plots. The 1990s saw wide availability of CAD tools, which model 3D objects for printing. Medical researchers also started using 3D printing in their research. In 1999, medical researchers used a 3D-printed scaffold to support organs grown from patient cells.

The early years of the new millennium brought additional milestones for 3D printing. Scientists fabricated a miniature, working kidney and bioprinted blood vessels. Engineers flew a 3D-printed, unmanned aircraft. A prototype for a 3D-printed car body was designed with the potential for 200 mpg. Low-cost 3D printers also arrived through developments such as the RepRap Project, an open-source initiative established with the goal of making machines that could replicate themselves. This, along with the rise of collaborative services like Shapeways and MakerBot’s Thingiverse, lowered the barrier for innovators to enter the field. As the movement toward mass customization in manufacturing picked up steam, on-demand industrial parts fabrication was made possible through 3D printing.

Today, 3D printing is being used in nearly every industry. Manufacturing uses it to speed up the prototyping process; traditionally, prototypes are created with a mold or by hand, which is both expensive and time-consuming. The rapid prototyping process made possible through 3D printing allows developers to experiment with different shapes, sizes and materials with minimal waste and overhead. The ability to produce multiple prototypes also enables simultaneous market testing of multiple design iterations. The process could open the door to same-day fabrication and shipping of new products.

3D manufacturing is clearly one of the most innovative technologies available for manufacturing. Although it has only been around for a few decades, it is quickly becoming a valuable tool for a range of industries and applications.

By posting a comment you confirm that you have read and accept our Posting Rules and Terms of Use.
Re: 3D Printing: The Future of Manufacturing
#1

"A prototype for a 3D-printed car body was designed with the potential for 200 mpg."

That's some body. I wonder what it would do with an engine under it.

See the entire discussion on CR4, the Engineering Community
Advertisement
RELATED ARTICLES
Postprocessing as a limiting factor for production-scale additive manufacturing
Will 3D printing shift into high gear in the Covid-19 fight?
6 tips for at-home 3D printing
How to select the best prototyping method for your project
Industrial 3D printing for prototyping and production
Advertisement