V2X Network Heads to the Mountains 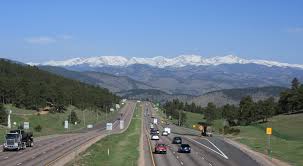 The V2X will extend along I-70 from Golden to Vail, Colo.

The Colorado Department of Transportation (CDOT) and Panasonic Corp. of North America plan to deploy an advanced vehicle-to-everything (V2X) network along Interstate 70 by the end of 2018.

During a recently completed pilot deployment, CDOT and Panasonic installed and tested five V2X roadside units and six V2X vehicle onboard units, and also established a Network Operations Center to manage the overall system. In a second-stage of the project, 100 roadside units will be in place along the I-70 Mountain Corridor from Golden to Vail.

Using the system, drivers and traffic managers will receive real-time information about road conditions such as traffic delays, icy conditions and crashes through continuous and automatic communications between individual vehicles and roadside infrastructure. Once deployed, the system is projected to result in an 81 percent decrease in unimpaired multi-vehicle crashes, as well as more reliable travel times and, eventually, the ability to communicate with self-driving cars.

In addition to installing roadside units, more than 100 CDOT vehicles that regularly drive the I-70 Mountain Corridor will be equipped with technology that allows them to communicate information to and from the Traffic Operations Center. A second project phase will allow traffic managers to begin sending messages to connected vehicles via the roadside units.

By the end of 2018, roadside units installed along the I-70 Mountain Corridor are expected to be able to communicate with all V2X-equipped vehicles. For example, drivers will receive alerts to slow down when vehicles ahead suddenly apply their brakes. If an airbag is deployed, an alert will be sent from the vehicle to a roadside unit, so that traffic managers can dispatch emergency responders to the crash site.

CDOT estimates that a statewide V2X system will generate more than 2 billion safety messages per hour from vehicles. That means the CDOT system will manage and process 70 times more volume per hour than Twitter.

By posting a comment you confirm that you have read and accept our Posting Rules and Terms of Use.
Advertisement
RELATED ARTICLES
Siemens and Cohda Wireless Plan Vehicle-to-Infrastructure Devices
V2X is key to truly autonomous vehicles
Network architecture essentials for V2X
Renesas Releases Communication Chips for Autonomous Cars
The new iATL helps smart cars connect to smart infrastructure
Advertisement