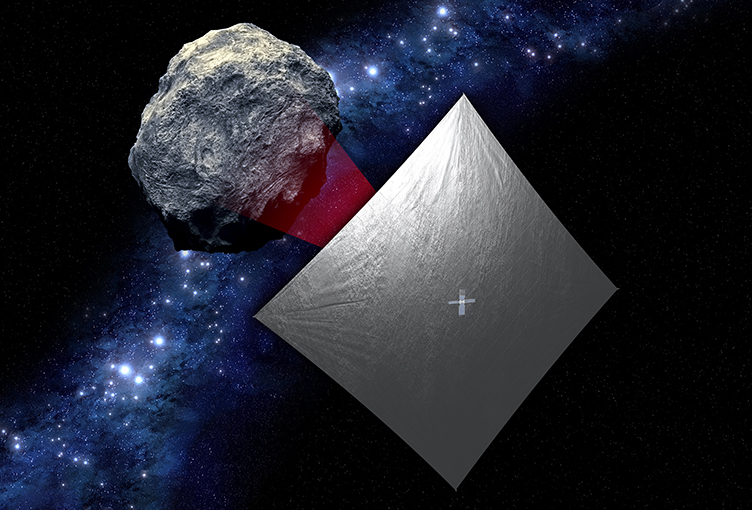 Concept image of NEA Scout with its solar sail deployed as it conducts an experiment. Source: NASA.

One of the more fanciful notions to be explored by scientists and science-fiction writers alike is solar sailing — the concept of a spacecraft that could be outfitted with sails and propelled by the sun. With a few notable exceptions (such as the Japan Aerospace Exploration Agency’s IKAROS, launched in 2010), the idea has moved forward in fits and starts, proving considerably easier to envision than to actually put into operation.

Now, a Rochester Institute of Technology (RIT) researcher is advancing the concept through the use of advanced photonic materials. Grover Swartzlander, a professor of imaging science at the institute, has proposed replacing reflective metallic sails with diffractive metafilm sails in order to correct known limitations such as overheating and excessive spacecraft tilt. The sails could be used to efficiently steer reflected or transmitted photons for space travel.

The sails represent a new application of metamaterials, which are engineered to have properties not found in nature. The metafilms proposed for the sails could also be used to replace heavy and failure-prone mechanical systems with lighter controls having no moving parts.

Swartzlander, who is currently leading an exploratory study supported by funding from NASA, will be facilitating an incubator meeting of The Optical Society in Washington, D.C., from Oct. 7-9, 2018. The purpose of that meeting, titled “Metamaterial Films for In-Space Propulsion by Radiation Pressure,” will be to create a roadmap for advancing metamaterial sails on miniaturized, low Earth-orbiting satellites known as CubeSats, a technology Swartzlander sees as a potential game-changer.

"CubeSats are becoming of great national importance for science, security and commercial purposes," he said. "The potential to raise, de-orbit or station-keep hundreds of CubeSats from low Earth orbit would be a recognized game changer that would build enthusiasm and advocacy among the growing small-satellite community of students, entrepreneurs and aerospace scientists and engineers."

The first CubeSat science mission with attached sails, NEA Scout, will launch later this year as part of NASA’s Exploration Mission-1. After deployment, the robotic craft will be propelled on a two-year cruise by sunlight reflected from its aluminum-coated polyimide sail.