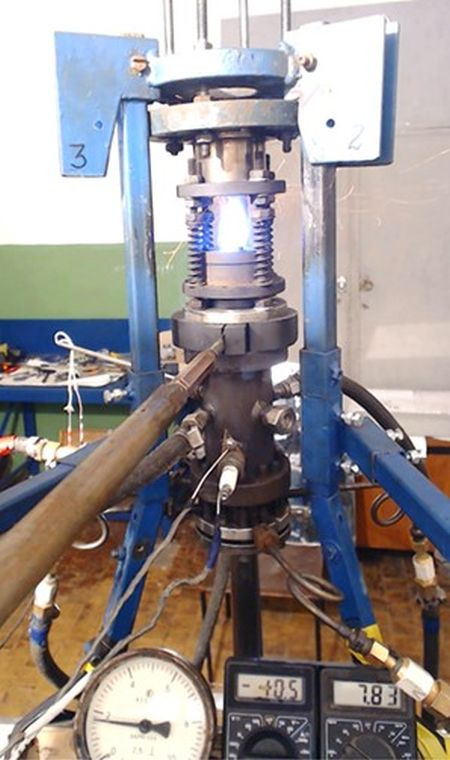 Source: University of Glasgow of space debris has been test-fired. A craft powered by such an engine would consume its own structure during ascent, freeing up more cargo capacity and creating less orbital debris.

Currently deployed rockets use tanks, which outweigh the useful payload, to store their propellant during ascent, resulting in reduced launch vehicle efficiency and contributing to the space junk problem. By contrast, the autophage engine consumes a propellant rod with solid fuel on the outside and oxidizer on the inside. The solid fuel is a strong plastic, such as polyethylene, so the rod is effectively a pipe full of powdered oxidizer. Driving the rod into a hot engine vaporizes the fuel and oxidizer into gases that flow into the combustion chamber, producing thrust and the heat required to vaporize the next section of propellant.

Researchers from Glasgow University and Oles Honchar Dnipro National University in Ukraine demonstrated that the solid rocket can be throttled in real-time by varying the speed at which the rod is driven into the engine, and have sustained rocket operations for 60 seconds at a time laboratory tests. The next stage is to secure further funding to investigate how the engine could be incorporated into a launch vehicle.

By posting a comment you confirm that you have read and accept our Posting Rules and Terms of Use.
Advertisement
RELATED ARTICLES
American-made BE-4 Rocket Engine Could End U.S. Dependence on Russian RD-180
Video: Paraffin Wax Fuels Hybrid Rocket Engine
New rockets to serve as their own fuel source
Preburner Tested for AR1 Rocket Engine
Lunar Lander: How One Engineer's Persistence Led to Apollo Success
Advertisement