Improving Measurement at the Nanoscale 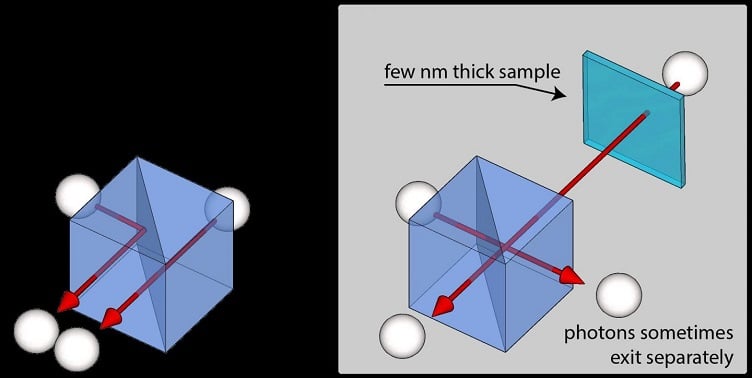 Illustration of photons entering the beamsplitter. Source: University of Warwick.

Research into optical sensing that involves the University of Warwick, the University of Glasgow and Heriot Watt University has resulted in a new technique that fires two nearly-identical photons onto a component known as a beamsplitter and then monitors photons' subsequent behavior. Up to 30,000 photons can be fired per second, with 500 billion in use throughout a full experiment.

To measure the thickness of a transparent object, the two photons are fired along separate paths: Photon A continues to the beamsplitter, while Photon B gets slowed down by the object before entering the same beamsplitter. The more separation there is in terms of the time it takes for each photon to exit the beamsplitter represents a measurement of thickness.

The new setup offers the same precision and stability as existing one-photon techniques - at significantly less expense. It also offers up to 100 times better resolution than existing two-photon techniques - opening up the potential of aiding research into cell membranes and DNA, as well as providing quality control for nanoscopic 2D materials such as graphene. The technique is capable of measuring thickness less than 1/100,000 the width of a human hair.

"Until now, so-called two-photon interference has not been able to achieve such great resolution, meaning that we are stuck with some of the downsides of the established methods based on single-photon interference -- which requires more expensive technology than our new two-photon technique,” explained Dr. George Knee of the University of Warwick, who developed the theory behind the new method. “Sensors such as ours could have a big impact on biological imaging and the associated research that it feeds into."

The research was recently published in Science Advances.

By posting a comment you confirm that you have read and accept our Posting Rules and Terms of Use.
Advertisement
RELATED ARTICLES
China has Successfully Teleported an Atom into Space
Microscope Add-on Enhances 3D Imaging of the Brain
Complex photons expected to boost future quantum technologies
Reshaping the Solar Spectrum to Boost PV Efficiency
Nanoscale Mirrors Make Data Transfers More Secure
Advertisement