A report prepared as part of the police investigation into the Grenfell Tower fire that killed 71 people in London in June 2017 found deficiencies in the installation of windows, cavity barriers and cladding systems, and their failure to meet building regulations.

The 210-page interim document, by fire investigation experts BRE Global, was leaked to the Evening Standard newspaper in April. The report allegedly details how the original concrete building was compromised by a refurbishment that took place between 2014 and 2016.

The newspaper says that the report not only finds the cladding material and insulation were combustible, but that the design and installation of windows and cavity barriers were improperly done. Cavity barriers are critical in closing the gap between the inner and outer skins of the building to prevent a chimney-like effect in the event of a blaze.

The BBC reported just after the fire that Grenfell Tower was built in 1974 by Kensington and Chelsea Borough Council. A two-year £10 million ($12.8 million) refurbishment was completed by Rydon Construction in 2016. Work reportedly included new exterior cladding, replacement windows and a communal heating system. The BBC said that "extensive remodeling of the bottom four floors" was completed, creating nine additional homes and improvements to communal facilities. 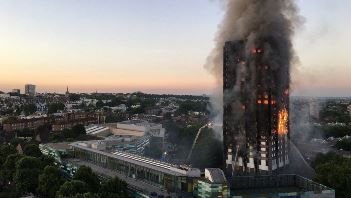 The report allegedly states that the 2014-16 refurbishment failed to meet fire safety standards set out in building regulations. This proved critical for the rapid spread of flames through the building. Credit: BBCMultiple systems are typically used to detect, report and suppress fires in commercial and residential buildings. In addition, multiple local and international building codes and standards exist and apply to virtually all new construction.

According to the leaked report, the fire started in a refrigerator in an apartment on the building's fourth floor. Flames then traveled through an open window near the refrigerator, took hold in the cladding and burned the entire 24 story, 70-meter-high building.

One of the report's conclusions is that the fire would not have spread beyond the point of origin if the original facade of the building had not been re-clad. The report allegedly states that the 2014-16 refurbishment failed to meet fire safety standards set out in building regulations. This proved critical for the rapid spread of flames through the building.

According to the newspaper, the report says, “Grenfell Tower, as originally built, appears to have been designed on the premise of providing very high levels of passive fire protection. 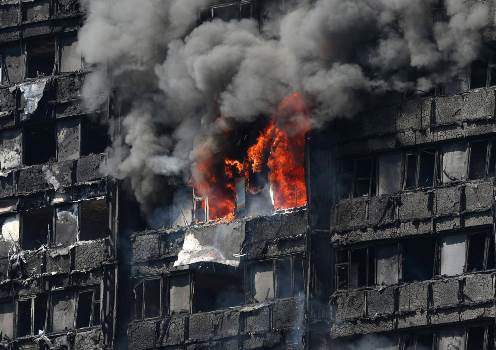 The insulation used was “combustible” and “provided a medium for fire spread up, across and within sections of the facade.” Credit: Evening Standard“The original facade of Grenfell Tower, comprising exposed concrete and, given its age, likely timber or metal frame windows, would not have provided a medium for fire spread up the external surface. In BRE’s opinion … there would have been little opportunity for a fire in a flat of Grenfell Tower to spread to any neighboring flats.”

The experts found instead that “deficiencies” in the construction of the new facade provided fuel for the fire to spread. The report allegedly identifies five breaches of building regulations that appear directly implicated in the loss of life:

The report says: “A building of Grenfell’s height ought to have been fitted with a wet rising main [which contains water at all times] as part of the refurbishment; instead the existing dry rising main [which has to be supplied from a fire engine] was extended and modified.”

BRE cited two other breaches of building regulations, the absence of a sprinkler system and the single stairwell being 8cm too narrow. However it does not necessarily regard these weaknesses as directly responsible for loss of life. It added that the stairwell would have been “difficult and expensive to change as part of any refurbishment.”