Cleveland Clinic researchers report progress in restoring natural movement sensation in patients with prosthetic arms. Small, powerful robots were used to vibrate specific muscles to trigger patients’ sensation of movement, allowing them to feel that their fingers and hands were moving and that they were an integrated part of their own body. By feeling their missing hands while controlling their bionic prostheses, patients could make complex grip patterns to perform specific tasks as well or better than able-bodied people. 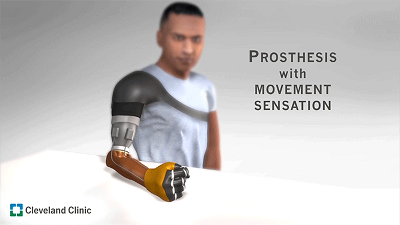 Illusory movement perception improves motor control for prosthetic hands. Source: Cleveland ClinicThe researchers explain that muscles need to sense movement to work properly, and this method basically hacks the neural circuits behind that system. Six patients who had previously undergone targeted nerve reinnervation, a procedure that establishes a neural-machine interface by redirecting amputated nerves to remaining muscles, participated in the trial. When reinnervated muscles were vibrated to provide illusory movement, the subjects not only felt their missing limbs move, but could use these sensations to intentionally manipulate their prostheses to accurately guide complex grips.

This is important because when an able-bodied person moves, the brain constantly receives feedback regarding the movement’s progress. This unconscious sense prevents errors in movement, like overreaching, and allows the body to make necessary adjustments. People with amputation lose this essential feedback, however, and as a result, cannot control their prostheses without having to watch them carefully at all times.

The study demonstrates that the sense of missing limb movement, caused by the strategic muscle vibration, provided patients with better spatial awareness and improved fine motor control without having to visually monitor the prostheses. Additionally, the movement sensation made the bionic arms feel more like “self.”

The team will next examine ways to expand these techniques to patients who have lost a leg, as well as for those with conditions that inhibit movement sensation such as stroke. The system will also be packaged into a prosthesis for longer-term applications to enable patients to operate the system on a daily basis.

The research is published in Science Translational Medicine.

By posting a comment you confirm that you have read and accept our Posting Rules and Terms of Use.
Advertisement
RELATED ARTICLES
Researchers Create Artificial Limbs that Can be Mapped in the Brain
Watch: Spinal cord stimulators restore sensory feedback to prostheses
Mind-Controlled Prosthetic Arm Moves Individual "Fingers"
Just Like Real: Advances in Prosthetic Limbs
Regaining the ability to walk independently
Advertisement