At a launch facility in West Texas, Blue Origin launched and landed its suborbital New Shepard rocket booster and capsule in a successful test flight. The mission was the first flight of the third New Shepard rocket that Blue Origin has built. Atop the booster sat Crew Capsule 2.0, the second iteration of the New Shepard crew capsule. The launch occurred on December 12. 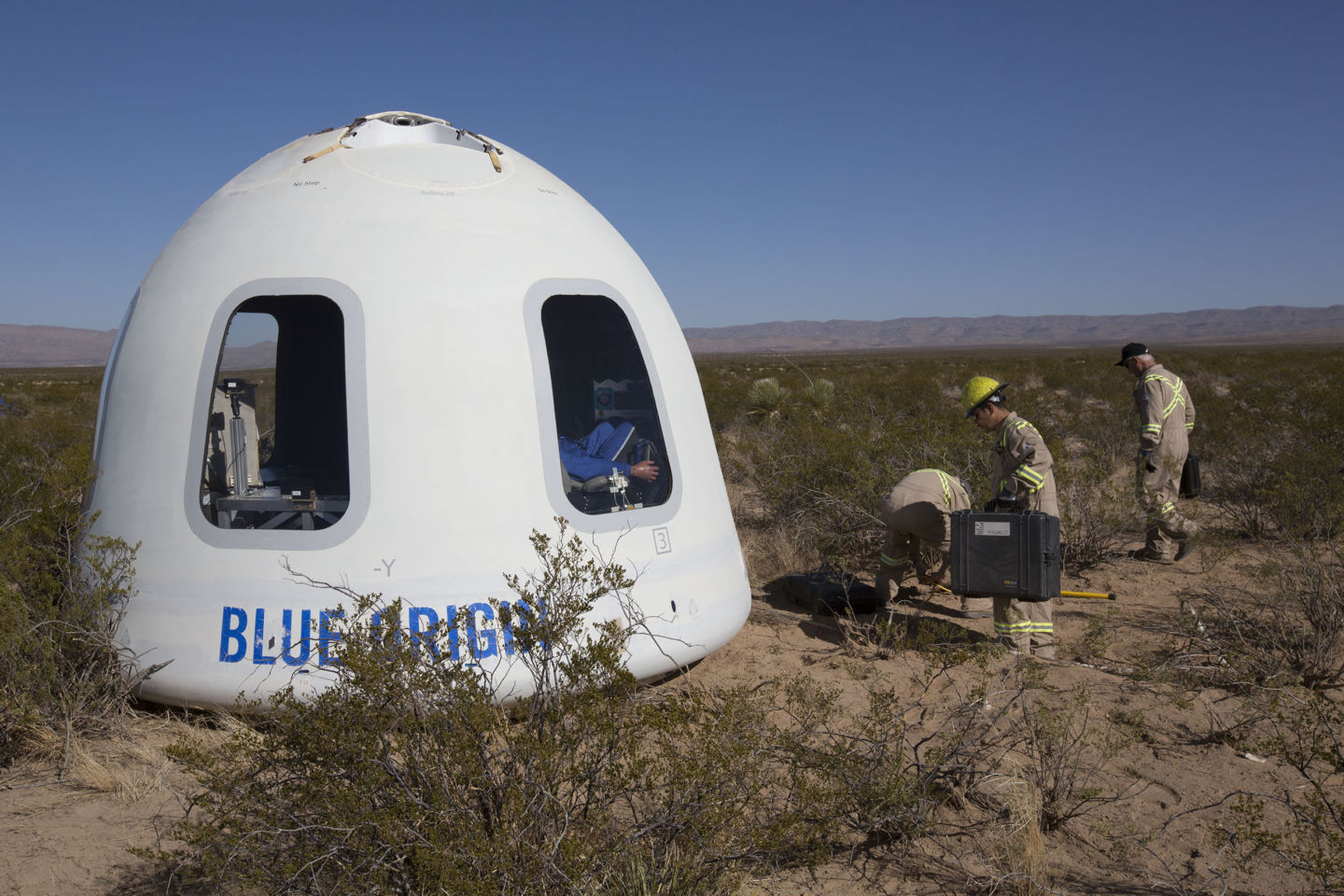 After separating from the booster and reaching the apex of its flight, the capsule descended back to Earth under parachutes and landed at a speed of only 1 mph. The booster also returned to the ground in a controlled vertical landing, touching down at a speed of just 6.75 mph following a maximum descent velocity of Mach 3.74. The entire flight lasted 10 minutes and six seconds.

The new equipment features a number of improvements that enhance New Shepard’s reusability. The booster now has built-in service panels for faster access to internal components, while the capsule has real windows rather than painted-on facsimiles. The windows on Crew Capsule 2.0 are the largest ever to fly into space, measuring 2.4 ft. wide by 3.6 ft. tall.

Although the test flight was unmanned, stowed aboard the capsule was a dummy outfitted with sensors dubbed “Mannequin Skywalker.” The data obtained will help determine how humans would be affected by the forces experienced on a crewed mission of New Shepard. The spacecraft also carried 12 commercial, research and education payloads.

In the last flight of New Shepard in October 2016, Blue Origin tested the rocket’s launch abort system, separating the crew capsule from the booster in a mock emergency 45 seconds after liftoff at 16,000 ft. in the sky. Both components of New Shepard completed a successful landing following the abort procedure, despite the booster withstanding 70,000 lb. of force from the explosive firing of the escape motor.

Blue Origin, a company created by Amazon.com founder Jeff Bezos, hopes to send its first human tourists into space using the New Shepard capsule and booster as early as 2018.

“Within the next 18 months, we’re going to be launching humans into space,” said Bob Smith, Blue Origin’s CEO, on October 5, 2017, addressing the National Space Council. “These won’t be astronauts — people that would have been trained and specialized within an area — but these will be everyday citizens.”

Blue Origin is also working on a heavy-lift rocket that could be used for a range of missions, including satellite launches and eventual crewed trips to space. Standing 270 ft. tall, with 3.85 million pounds of thrust, the New Glenn launch vehicle will be powered by seven BE-4 rocket engines.

BE-4, the most powerful rocket engine made in America in decades, underwent its first hot-fire test on October 18, 2017. Blue Origin also hopes the engine will be chosen to power the Vulcan rocket being developed by a joint venture between Lockheed Martin and Boeing for United Launch Alliance.

Also in development at Blue Origin is a reusable lunar cargo spacecraft known as Blue Moon. This lander would be capable of landing on the moon to deliver a payload of cargo before relaunching to rendezvous with a lunar space station in orbit. Blue Origin hopes to partner with NASA on the project, delivering assets to the moon for an eventual permanent human settlement.