Cartilage — the tough, strong tissue that protects knees — may have met its match in the form of a new composite material developed at the University of Michigan and Jiangnan University.

Other synthetic materials focus on replicating one of the two chief components of cartilage, the tough fiber matrix that gives it strength and water, which lends resilience. Cartilage is 80 percent water; one approach to 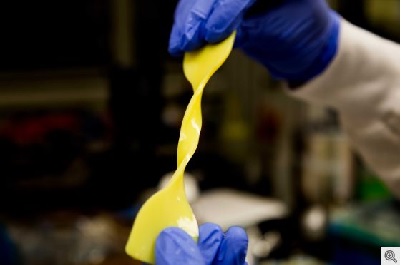 The artificial cartilage is very flexible yet resistant to tearing. Source: Joseph Xu, Michigan Engineering producing a synthetic tissue relies on hydrogels designed with enough water to support the growth of cartilaginous cells. These materials are subject to tearing under strain forces much less than a kneecap would have to endure. The other approach focuses on recreating the fibrous matrix.

The researchers, led by Michigan’s Nicholas Kotov, combines both characteristics of natural cartilage, using Kevlar nanofibers to build the matrix and filling the matrix with polyvinyl alcohol (PVA), a material often used in hydrogel cartilage replacements. Both components are critical to proper functioning. Human cartilage gains its strength when the fiber network resists the flow of water. Under stress, water pressure reconfigures the matrix, deforming without breaking. Water is released and reabsorbed later.

The “Kevlartilage” produced in the lab works the same way. When the Kevlar matrix is deformed, it releases water. When it returns to a relaxed state, the material absorbs water. In test versions that are 92 percent water, the strength is comparable to natural cartilage.

The most obvious application for the synthetic cartilage would be knees. The tens of thousands of Americans who have kneecaps repaired or replaced could be much better served by Kevlartilage. Kotov proposes that the new material would make a good implant in some cases. He and the team speculate that chondrocytes — the only cells in human cartilage — might move into the synthetic network and create a hybrid form.

Kotov points out that the technique used to make Kevlartilage could produce other kinds of membranes that use both structural fibers and water.

"We have a lot of membranes in the body that require the same properties. I would like to evaluate the space," Kotov said. "I will talk to doctors about where the acute need is and where this intersection of the properties will allow us to make the best headway and biggest impact."

Re: New Material Shows Promise as a Cartilage Replacement
#1

This is a ground-breaking advance. Maybe this can find use in robotics as well as human repair.

As to membranes made in this composite way, interesting properties of ion conduction may yet be found.