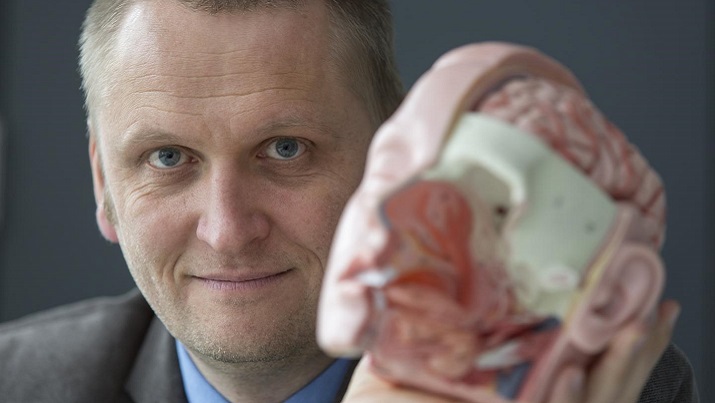 Gernot Müller-Putz, head of the TU Graz Institute of Neural Engineering. Image credit: Lunghammer/TU Graz.Thanks to BCI, or brain-computer interfaces, physically impaired persons can use their minds to control prostheses that replace certain bodily functions. BCIs can be used to surf the web, to write email – and now, to write music.

A group led by Gernot Müller-Putz from the Institute of Neural Engineering at Graz University of Technology (TU Graz) has used an established BCI method for writing to develop a new application that composes music and transfers it onto a musical score.

The method works by flashing a table of various options – letters or notes, pauses, chords, etc. – one after another. Wearing a special cap to measure brain waves, a user focuses on a desired option as it lights up. This causes a minute change in brain waves, which is recognized by the BCI.

In the study, titled “Brain Composer,” 18 test subjects had to "think" melodies onto a musical score. Each of the subjects had a degree of basic musical and compositional knowledge. “After a short training session, all of them could start composing and seeing their melodies on the score and then play them,” says Müller-Putz. “The very positive results of the study with bodily healthy test persons are the first step in a possible expansion of the BCI composition to patients.”

"Twenty years ago, the idea of composing a piece of music using the power of the mind was unimaginable,” Müller-Putz adds. The study may help point the way to new research directions for BCI at TU Graz.

TU Graz will host an international BCI conference from Sept. 18-22, 2017 in Graz, Austria. The conference will include a “BCI Science Slam” open to the public, in which five researchers will stage their current topics with mini-shows lasting six minutes each. Workshops at the conference include cloud-based BCIs, mobile electroencephalogram (EEG) and neuroadaptive technology.