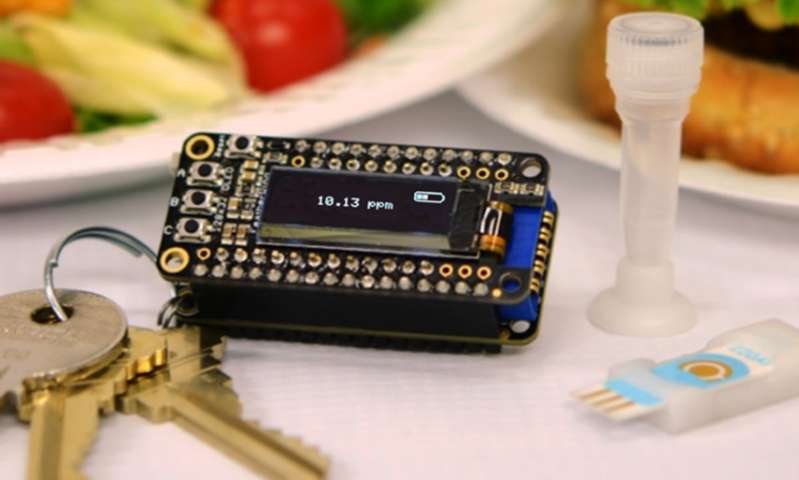 A portable allergen-detection system with a keychain analyzer could help people with food allergies test their meals. Source: The American Chemical SocietyPeople who experience food allergies go a long way to avoid consuming trigger foods, but eating out or eating prepared foods continues to challenge sufferers. That is, until now, thanks to a keychain developed by a team of researchers.

Detailing their product in the journal ACS Nano, researchers developed a $40 keychain that acts as an allergen detector. The portable keychain, working in conjunction with a smartphone, can be used in restaurants or with prepared foods where cross contamination and mislabeling can often lead to a range of reactions from mild (rash) to severe (anaphylaxis).

Called an integrated exogenous antigen tester, or iEAT, the keychain detects the presence of allergy-causing foods such as egg whites, wheat, peanuts, hazelnuts and milk—all in under 10 minutes.

The researchers believe that the keychain could be expanded to include tests for other allergens and for the presence of pesticides in foods.

By posting a comment you confirm that you have read and accept our Posting Rules and Terms of Use.
Advertisement
RELATED ARTICLES
Researchers Develop Transparent Patch to Detect Dangerous Food Threats
Film Prevents Odor from Stinky Foods
Processed Foods: The Good, the Bad, and the Healthy?
Insect-inspired material paves the way for antibacterial packaging
Pen-like sensor detects dangerous nerve agents, spoiled food
Advertisement