A new milestone has been achieved by the Alameda-Contra Costa (California) Transit District (AC Transit) – 25,000 hours of continuous operation of a Fuel Cell Electric Bus, or FCEB #7. In 2015, the FCEB power plant set an international record for 20,000 hours of continuous operation. These accomplishments showcase the durability of hydrogen fuel cell in daily revenue service. 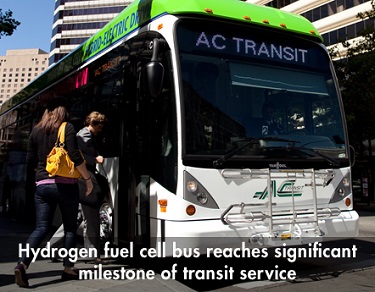 FCEB #7 is one of thirteen zero-emission buses operated by AC Transit. The National Renewable Energy Laboratory documents a series of successes of the AC Transit FCEB fleet, including:

By posting a comment you confirm that you have read and accept our Posting Rules and Terms of Use.
Re: Fuel Cell Bus Meets Diesel Engine Life Expectancy
#1

This successful experiment performed by the Alameda-Contra Costa shows that reliability and durability of hydrogen fuel cells is pretty impressive. You need to visit this page in order to get essay writing. We should conduct more researches on the hydrogen fuel cells.