Wireless Communications in the Industrial Environment

Not so long ago, electronic devices communicated with each other via wires and cables, and in fact many still do. The hallmark of electronic devices today is their newfound ability to communicate with each other wirelessly. Some, like cell phones, require a planet-wide network, and others like credit card readers, need only inches. And due to limited energy storage capabilities of many mobile devices, energy efficiency can be a paramount concern. Because of these widely divergent requirements, a plethora of communications modalities have been developed -- each optimized to its own purposes.

Wi-Fi and Bluetooth both operate at about the same frequency, around 2.4 GHz, but they serve very different purposes. Bluetooth can be thought of as a replacement for a connecting cable, and can be used to connect a mouse and keyboard to a PC or a laptop, or a wearable device to a smartphone. Bluetooth devices can also communicate amongst themselves. Wi-Fi (a.k.a. WLAN) is used to connect mobile devices to the internet by accessing mobile “hotspots.” They are compared in Figure 1.

Radio Frequency Identification (RFID) and Near Field Communication (NFC) are two closely related standards that use radio signals of frequencies ranging from a few hundred KHz to a few tens of MHZ for communications and tracking purposes. Both are characterized by limited data transfer rates over relatively short distance. RFID is most often used to query passive tags for purposes such as inventory control or baggage handling. NFC is used for peer-to-peer communications, and can be used for file sharing in both directions.

IrDA is an acronym for Infrared Data Association, the industry group that maintains the standard. It is based on communication over infrared light. Unlike the other two modalities, IrDA doesn’t radiate spherically, but rather on a very tight pathway. IrDA’s operating parameters are detailed in Figure 1.

A Reason to be Wary of WLAN and Bluetooth: Your Microwave Oven

Ever look at the back of your microwave oven and notice that it operates at 2.4 Gigahertz (GHz) or thereabouts? That’s just about the same frequency as Wi-Fi and Bluetooth. Of course, these communications modalities work at many orders of magnitude less power than does a microwave, but you don’t hold your microwave oven next to your ear as you cook your popcorn. Figure 1 compares IrDA to the other two technologies. Rather than polluting the environment with microwave emissions that radiate everywhere, IrDA communicates over a beam of harmless light. 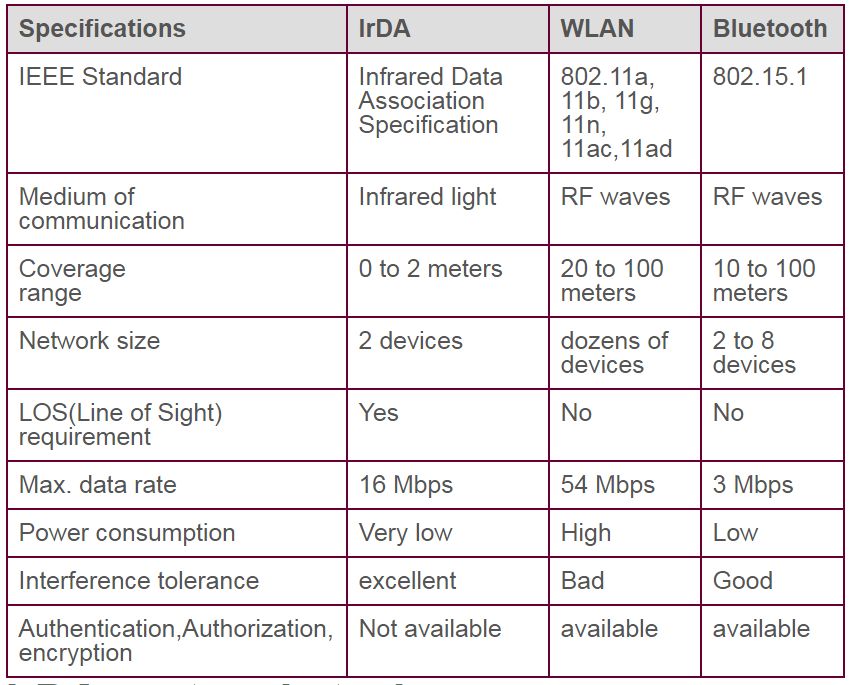 IrDA in the Industrial Environment

In today’s industrial environment, Programmable Logic Controllers (PLCs) are industrial computers used to control the machines on the front line. Because the process being controlled may be in dangerous or remote areas, when the program needs to be changed or altered, it is done remotely through a device such as a parameter programmer.

As the concerns over microwave exposure grow, we can expect to see more devices taking this safer pathway. Currently, new versions of IrDA that can transmit and receive data at the gigabit-per-second rate are being pursued.

By posting a comment you confirm that you have read and accept our Posting Rules and Terms of Use.
Advertisement
RELATED ARTICLES
Boyd enables the next generation of wearable medical patches
Wireless gas sensors gain adoption with the rise of IoT
Microwaves Are Used to Produce High-quality Graphene
At-Home Vital Sign Monitoring
Video: Making 3D Printed Parts Stronger by Using Traditional Welding Concepts
Advertisement