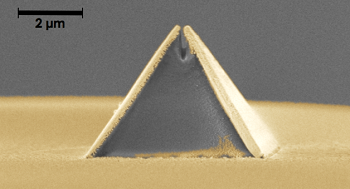 The Campanile probe, developed by Molecular Foundry scientists four years ago, has a tapered, four-sided shape resembling the top of the Campanile clock tower on University of California, Berkeley’s campus. The probe is mounted at the end of an optical fiber, and focuses an intense beam of light onto a much smaller spot than is possible with current optics. This enables spectroscopic imaging at a resolution 100 times greater than conventional spectroscopy, which only maps the average chemical composition of a material.

The probe can image the molecule-by-molecule makeup of nanoparticles and other materials. It can be used to examine a nanowire for minute defects, for example, leading to new ways to improve nanowires for use in more efficient solar cells.

Fabrication of Campanile probes and other nano-optical devices typically requires milling a 3-D shape with sub-100-nanometer scale features on the tip of a wispy fiber, which is much trickier than fabricating a nanostructure on a flat surface such as a wafer.

Fiber nanoimprinting speeds up this process, once the first time-consuming step is completed. Scientists create a mold with the precise dimensions of the desired nano-optical device. For the Campanile probe, this means a mold of the probe’s nanoscale features, including the four sides and the light-emitting 70-nanometer-wide gap at the pyramid’s top. This step may take a few weeks, but only one mold is needed to begin printing.

The finished mold is filled with a special resin and positioned atop an optical fiber. Infrared light sent through the fiber allows scientists to measure the exact alignment of the mold in relation to the fiber. If everything checks out, UV light is sent through the fiber, which hardens the resin. A final metallization step coats the sides of the probe with gold layers.

A probe can be printed every few minutes, providing researchers with backup devices in case one of the fragile Campanille probes breaks. The fabrication technique can also be applied to any nano-optical device, and has so far been used to create Fresnel lenses and beam splitters, in addition to the Campanile probe.

By posting a comment you confirm that you have read and accept our Posting Rules and Terms of Use.
Advertisement
RELATED ARTICLES
Skip the Biopsy with Compact Endoscopic Fiber Probe for Cancer Diagnostics
Mini Probe Images Deep Within the Body
Fiber Optic Sensors Dissolve in the Body
Researchers Use 3D Printing to Fabricate Optical Fiber
Silk Sensor Could Speed Development of New Infrastructure, Aerospace and Consumer Materials
Advertisement