Getting the Jump on Industrial Failures

A team led by researchers at King Abdullah University of Science and Technology (KAUST) has developed a statistics-driven method to detect emerging problems in industrial processes that could improve safety, reliability and productivity.

From oil and gas refining to water treatment and product manufacturing, precise process control has become an integral but challenging part of modern industry. Even small deviations in process parameters can result in lost time, and catastrophic failure can bring health, safety and financial consequences. 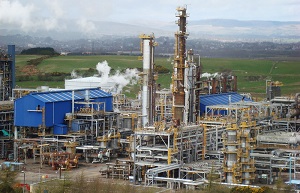 From oil and gas refining to water treatment and product manufacturing, precise process control has become an integral but challenging part of modern industry. Image credit: Pixabay. Conventional methods for detecting process variations rely on the statistical identification of trends in the constant stream of monitoring data from key points in the process. To avoid false alerts, however, many observations are needed before a warning is triggered. So when an anomaly is detected, it is often too late to avert a major problem, requiring a process shutdown.

“The detection of incipient anomalies is crucial to maintain the normal operation of a system by providing an early warning,” says Ying Sun, professor in the Division of Computer, Electrical and Mathematical Sciences and Engineering at KAUST. “The problem is that incipient anomalies are often too weak to be detected by conventional monitoring methods.”

The method developed by Sun and colleagues incorporates information from the entire process history, rather than just the most recent observations, so the detection indicator is more sensitive to small changes. The team’s statistics-based approach involves construction of a memory chart of multiple monitoring parameters using a technique known as principle component analysis. The test statistics for new measurements are then compared with a control limit set using "healthy" historical process data for anomaly detection and decision making.