Corn farmers across the northern U.S. Midwest often must plant in cold, damp spring soils that can slow early-season growth and impact yield and profitability at harvest time.

One way farmers in these colder regions deal with the problem is to apply starter fertilizer directly to their corn seed at planting. The assumption is that "in-furrow application" allows farmers to plant their corn earlier than they otherwise could. This means a longer growing season and, the hope is, greater yield benefits. 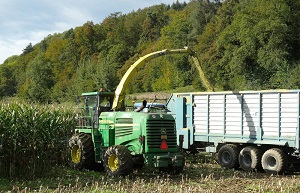 Northern Midwest corn farmers are advised to apply fertilizer based on the nutrient needs of their fields rather than the idea that it will lengthen the growing season. Image credit: Pixabay.A research team led by Daniel Kaiser, assistant professor in the University of Minnesota’s Department of Soil, Water and Climate, is now challenging that view.

Kaiser’s team applied in-furrow starter fertilizer to corn seed with different relative maturities, i.e., the number of days needed for the crop to be ready for harvest. They then planted seeds at various times in the spring to simulate early, on-time and late planting.

In-furrow starter application did lead to more early-season growth of the corn. But Kaiser found that its benefits—regardless of the planting date or relative maturity—were less apparent later in the season. In-furrow corn silked a couple of days earlier and had reduced grain moisture, Kaiser says.

"When [we] looked at it in terms of economic benefits, what we saw in terms of decreased grain moisture would cover the costs of the starter fertilizer we applied, and that was really about it,” he says. The only conditions that led to an economic benefit from the in-furrow application were in soils that tested low for phosphorus.

“If you’re looking at using starter fertilizer, I don’t think I would be basing the decision on things like planting date or relative maturity,” Kaiser says. “The main thing is really to base the decisions on what the overall nutrient needs are of the field."

Moreover, Kaiser says that farmers who do decide to use in-furrow starter fertilizers should make sure that they complement any broadcast fertilizers that they use.

“What we’ve been seeing more often than not is that there’s not a great economic benefit to using starter on top of broadcast fertilizer if applied at relatively high rates or in high soil-testing situations,” he says.

By posting a comment you confirm that you have read and accept our Posting Rules and Terms of Use.
Advertisement
RELATED ARTICLES
Study: Biotechnology and more farming land needed to expand cover crop seed cultivation
IoT Down on the Farm
Nanotech Nurtures Slow-Release Fertilizer
Camera-Equipped Drone Enables "Smart" Watering of Crops
Team manufactures synthetic starch from CO2
Advertisement