New return-to-park technology incorporated as a standard feature of the 2017 Ford Fusion uses data from the car’s network of sensors to detect conditions that indicate a customer’s intent to exit the vehicle. The smart technology is designed to ensure that the vehicle will select park, as intended, even if the driver forgets to turn the gear selector to "P" or accidently leaves it in another gear when parking. 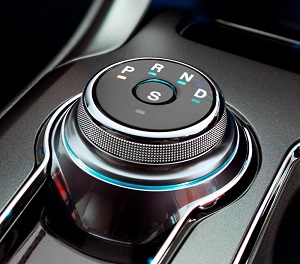 Return-to-park is intended to ensure that the vehicle will select park even if the driver forgets to turn the gear selector to "P" or accidently leaves it in another gear when parking. Image credit: Ford.

The return-to-park function is designed to automatically shift the car into park when any of the following conditions occur:

To achieve this functionality, the rotary gear shift dial has three different electronic modules monitoring transmission and shifter, which must all be in agreement for a gear selection command to be accepted. This is the same system that is capable of detecting and overriding such unintended scenarios as shifting into reverse while driving at speeds above 5 mph.

Ford says the technology can detect when a driver has turned the car off while it is moving and will first shift into neutral until it slows below 5 mph before shifting into park automatically. It is designed not to operate if it detects that a belted driver has opened the door with the car moving to free a stuck coattail, for example, or if a driver is inching into a parking space and wishes to see the lane markers. It will not operate when the car is in stay-in-neutral or neutral-tow mode.

According to a National Highway Traffic Safety Administration study published in August 2016, 360 people were killed in accidents involving unattended vehicles with no driver control between 2012 and 2014—representing 19% of all non-occupants killed in non-traffic crashes. In an average year, about 2,000 people are injured in similar incidents.

Jeez! My Ford won't let me turn the ignition off unless I place the transmission in Park. That part is already solved.

But that would make it impossible to drive it off a cliff. No fun at all!