By embedding leaves with carbon nanotubes, MIT engineers have transformed spinach plants into sensors that can detect explosives and wirelessly relay that information to a handheld device similar to a smartphone. This is one of the first demonstrations of the engineering of electronic systems into plants, an approach that the researchers call “plant nanobionics.”

“The goal of plant nanobionics is to introduce nanoparticles into the plant to give it non-native functions,” says Michael Strano, professor of chemical engineering and the leader of the research team. 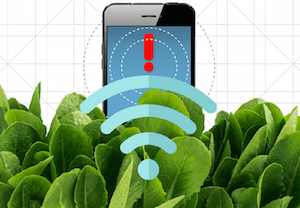 The researchers embedded sensors for nitroaromatic compounds into the leaves of the spinach plants. Image credit: Christine Daniloff/MIT.In this case, the plants were designed to detect chemical compounds known as nitroaromatics, which are often used in landmines and other explosives. When one of these chemicals is present in groundwater sampled naturally by the plant, carbon nanotubes embedded in the plant leaves emit a fluorescent signal that can be read with an infrared camera. The camera can be attached to a small computer similar to a smartphone, which then sends an email to the user.

Using a technique called vascular infusion, which involves applying a solution of nanoparticles to the underside of the leaf, they placed sensors for nitroaromatic compounds into a leaf layer known as the mesophyll, which is where most photosynthesis takes place. They then embedded carbon nanotubes that emit a constant fluorescent signal that serves as a reference. This allows the researchers to compare the two fluorescent signals, making it easier to determine if the explosive sensor has detected anything. If there are any explosive molecules in the groundwater, it takes about 10 minutes for the plant to draw them up into the leaves, where they encounter the detector.

To read the signal, the researchers shine a laser onto the leaf, prompting the nanotubes to emit near-infrared fluorescent light. This can be detected with a small infrared camera connected to a Raspberry Pi, an inexpensive credit card-sized computer similar to that inside a smartphone. Using this setup, the researchers can pick up a signal from about 1 meter away from the plant, and they are now working to increase that distance.

Michael McAlpine, associate professor of mechanical engineering at the University of Minnesota, says this approach holds great potential for engineering not only sensors but many other kinds of bionic plants that might receive radio signals or change color.

“When you have man-made materials infiltrated into a living organism, you can have plants do things that plants don’t ordinarily do,” says McAlpine, who was not involved in the research. “Once you start to think of living organisms like plants as biomaterials that can be combined with electronic materials, this is all possible.”

So far, the researchers have also engineered spinach plants that can detect dopamine, which influences plant root growth. They are now working to develop additional sensors, including some that track the chemicals that plants use to convey information within their own tissues.

By posting a comment you confirm that you have read and accept our Posting Rules and Terms of Use.
Advertisement
RELATED ARTICLES
Watch: Lettuce or Ligustrum as a Light Source?
Microneedle devices designed to protect plants
Coating prevents "rust" from forming on soybean leaves
Video: Plants to be outfitted with wearables
Soda Blasting Around Plant Life
Advertisement