Columbia University engineers have developed a new trilayer electrode structure to fabricate lithiated battery anodes in ambient air, which they say increases the energy density of lithium-ion batteries by as much as 10%-30%.

“When lithium batteries are charged the first time, they lose anywhere from 5% to 20% energy in that first cycle,” says Yuan Yang, assistant professor of materials science and engineering. “Through our design, we’ve been able to gain back this loss, and we think our method has great potential to increase the operation time of batteries for portable electronics and electric vehicles.” 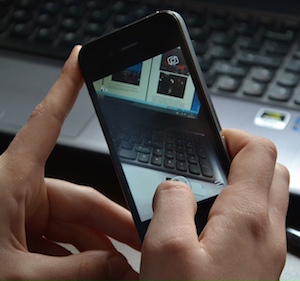 The advance could increase the operating time of batteries used for portable electronics, such as cell phones and laptops. Image credit: Pixabay. During the first charge of a lithium battery after its production, a portion of liquid electrolyte is reduced to a solid phase and coated onto the negative electrode of the battery. This process, usually done before batteries are shipped from a factory, is irreversible and lowers the energy stored in the battery.

The loss is approximately 10% for state-of-the-art negative electrodes, but it can reach as high as 20%-30% for next-generation negative electrodes with high capacity, such as silicon, because these materials have large volume expansion and high surface area. The large initial loss reduces achievable capacity in a full cell and thus compromises the gain in energy density and cycling life of these nanostructured electrodes.

The traditional approach to compensating for this loss has been to put certain lithium-rich materials in the electrode. However, most of these materials are not stable in ambient air. Manufacturing batteries in dry air is a much more expensive process than manufacturing in ambient air.

In the new trilayer electrode structure, the lithium is protected with a layer of the polymer PMMA to prevent it from reacting with air and moisture. The PMMA is coated with such active materials as artificial graphite or silicon nanoparticles and then dissolved in the battery electrolyte, exposing the lithium to the electrode materials.

“This way we were able to avoid any contact with air between unstable lithium and a lithiated electrode, so the trilayer-structured electrode can be operated in ambient air," Yang says. "This could be an attractive advance towards mass production of lithiated battery electrodes.”

Yang’s method lowered the loss capacity in state-of-the-art graphite electrodes from 8% to 0.3%, and in silicon electrodes from 13% to -15%. The -15% figure indicates that there was more lithium than needed, and the “extra” lithium can be used to further enhance the cycling life of batteries, as the excess can compensate for capacity loss in subsequent cycles.

Yang's group is now trying to reduce the thickness of the polymer coating so that it will occupy a smaller volume in the lithium battery—and to scale up the technique.

By posting a comment you confirm that you have read and accept our Posting Rules and Terms of Use.
Advertisement
RELATED ARTICLES
Silicon Anodes Could Boost Lithium-ion Battery Capacity
3D-Printing Method Developed to Strengthen the Capacity of Lithium-Ion Batteries
Lithium-Ion Battery Grows Back Together
Software tool tackles battery electrode microstructure analysis
Smart Lithium-ion Battery Warns of Fire Hazard
Advertisement