How did industrial production lines and processes manage all their motors, valves, tanks, and more in the mid-20th century? Usually with great difficulty and frustration: banks of interconnected relays were used first to sense various switches and points on the production line, and then decide what to turn on/off when and under what circumstances. Even a small production line often had a cabinet with dozens of relays. A large-scale production line might require a room of racks with hundreds or thousands of relays.

Not only did this take up space, but setting up the control rules ("programming") using a ladder-logic diagram resulted in complicated wiring schemes that were error prone. Debugging the system on start-up could be a painful process. Further, if and when a component failed, finding out which one was a slow process. Perhaps the only thing worse was trying modify the program. Doing so typically meant ripping out wiring and re-doing it. 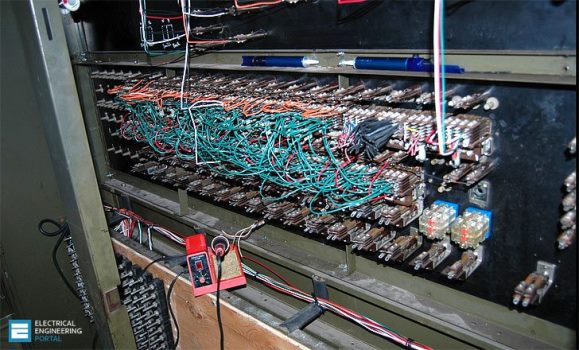 This modern implementation of a small relay-based controller shows the extent of the complicated set up and "rat's nest" of wiring. Image source: Electrical Engineering PortalAll this changed in 1968, when engineer Dick Morley and a small team produced an alternative: the programmable logic controller (PLC). Morley felt that a viable relay replacement, which he developed in response to a request for proposal (RFP) from General Motors, had to meet goals of physical ruggedness, compatibility with existing ladder logic, and deterministic behavior.

Before 1981 and the introduction of the IBM-type PC, "computers" were rack-sized minicomputers (or larger) made by companies such as Digital Equipment Corp. (DEC). Many of the innovations associated with PCs such as disk drives or full-screen displays may have been available on some minicomputers, but the machines themselves were costly, unreliable, and needed regular care and attention. All this ran contrary to the needs of an industrial production line.

General Motors, at that time one of the largest users of relay-based controllers in the U.S, knew that despite their capabilities, these units impeded productivity and operations. Among the reasons:

Given the advances in solid-state electronics, GM engineers felt there had to be a better way that could take advantage of logic implemented by transistors and even small-scale digital-logic ICs rather than relays. GM issued a detailed RFP for a new approach to implementing the controller, while retaining its useful aspects: 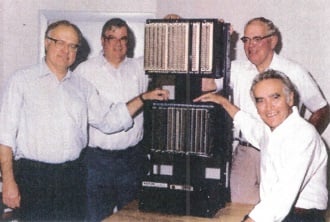 The Modicon development team and the 084, left to right: Dick Morley, Tom Boissevain, the Modicon 084, George Schwenk, and Jonas Landau. Image source: Automation.com Indeed, determinism proved to be critical. The unstructured nature of programming used the machine-language and assembly-language programming of the 1950s and 1960s and often required a combination of skill, art, luck, and "magic" in order to work. In contrast, the ladder-logic approach and relays had a defined, known-in-advance time needed to step through all the rungs as it executed its series of logic statements. There were no performance uncertainties which resulted from variations in basic path. This meant that designers could calculate the performance and update time and not worry about the program getting to the next rung too late due to one or more interrupts.

Four companies responded to the GM RFP: Morley's Bedford Associates; DEC, which offered a minicomputer-based solution; Allen-Bradley, which delivered a credible but large and complex unit; and Century Detroit. Morley best understand GM's requirements and the rationale behind them. He and his team won the contract and formed Modicon, a contraction of MOdular DIgital COntroller for the project.

Modicon delivered the Model 084 in 1969. It contained a processor board, memory, and a "logic solver" board, which parsed the algorithms associated with ladder logic. The PLC is specified not only by the number of inputs and outputs it can handle, but also by the number of instructions (“rungs”) it can execute per second. 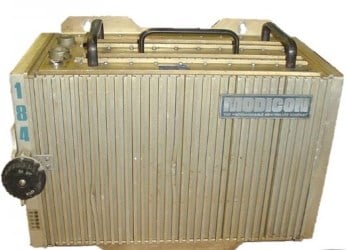 The Modicon 184 was the PLC that ignited the market and began the changeover from relay-based control to solid-state units. Image source: AutomationDirect.comBut the Modicon 084 was not a success. It was slow, had some cumbersome architectural issues, and lacked some useful features. Even so, it provided a decent start, and the Modicon team went back to work. In 1973, they introduced the Modicon 184, which is recognized as being the first mass-market PLC to achieve success.

Its impact was roughly analogous to Ford's Model T car. Like the 084, it was designed not only for functionality, but for its ruggedness: it had no fans or openings, and did not need regular "attention." In fact, Modicon minimized any notion that this was a "computer" at all. That term was strongly associated with finicky behavior, unreliable performance, and the need for a tightly controlled environment.

After the Modicon 084's success, other vendors entered the PLC business, all focused primarily on automotive production, which was the largest market. Within a few years, at least 10 credible vendors were in the space, including Modicon (which was purchased by Gould Electronics, and then by Schneider Electric, which continues to use the brand name).

As important as the PLC itself was, the programming unit used to enter the ladder-logic statements, as well follow the steps through the ladder and even perform basic diagnostics was equally important. The Modicon 084, and early competitive units, had no option other than to use a custom-built box which connected via a cable, and was disconnected during production use. As the PC became more common in the 1980s, vendors split into two camps. Some offered dedicated, fixed-function programmers with specific buttons labeled with PLC functions. Others went the PC route and took advantage of their lower cost and greater flexibility. PC-based units also offered the ability to store and recall countless programs, invoke advanced diagnostics, and support add-on applications (some vendors offered both). 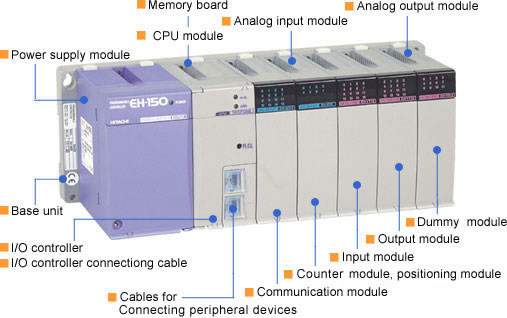 This dedicated PLC programmer is typical of the early units, with many dedicated function keys and a multiline display. Image source: Machine-Information-Systems.comMost PLC programmers are now PC-based and come equipped with a screen, keyboard or touch screen, and stripped-down, somewhat ruggedized central processing unit. Some also offer alternatives to ladder-logic programming, with high-level languages and "canned" modules for common applications, such as on/off control. Some even include an embedded (non-Windows) operating system designed to run despite software or hardware problems.

Nearly 50 years since its inception, where is the PLC today? Despite the availability of low-cost PCs, the PLC market is healthy and strong. For example, Germany-based market-research firm Statistica says the market is expected to grow to just under $15 billion by 2017. Between 2013 and 2018, they say PLC market could grow at a compound annual growth rate of 9.2%.

PLCs themselves have not been static, either. As their installation base and applications have increased, they have leveraged I/O and processing-power advances. Today's PLCs offer sophisticated computational units that can perform floating-point calculations, implement advanced algorithms, and drive flat-panel screens showing graphs, charts, and annotated block diagrams. Unlike their precursors which were digital input/output only, today's PLCs handle analog inputs and outputs for interfacing with proportional heaters and valves, temperature sensors, and even executing a PID or motor-control closed-loop algorithm.

Increasingly, PLCs are often referred to now as PAC units, short for programmable automation controller. This reflects that they have expanded beyond just logic statements and execution. Today's PLCs are complete, specialized computers optimized for industrial control but obscuring their internal processing power.

A PLC's "programming" has no relation to early computer languages (machine language, assembly language) or architectures (separate program and memory areas, use of interrupts). A PLC emulates the traditional relay-based control systems used for decades in industrial control. These relays implement combinatorial logic and can be hardwired to perform basic logic functions using AND, OR, and NOT, NAND, and NOR functions. As demonstrated by the earliest computers during World War II, relays can be hard-wired to implement statements such as:

where A, B, or C are input signals from a limit switch, temperature switch, or level indicator, and X is an on/off action controlling a motor, solenoid, or valve. 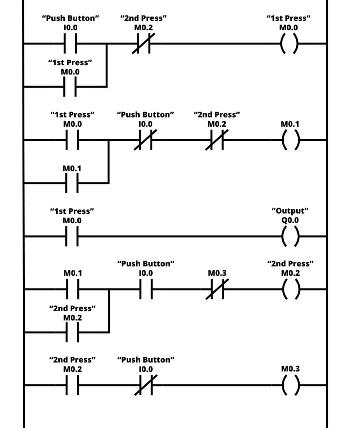 (Click to enlarge.) The basic ladder-logic program consists of a series of rungs, each defining a combinatorial logic statement. Image source: Ladder Logic AcademyOf course, a real factory production line has more than one or even several logic statements. There could be dozens, hundreds, or even thousands such statements for the relays to implement. Each statement was set up as a rung on a ladder, hence the term "ladder logic.” The relay-based controller stepped through all the rungs of the ladder by checking each set of inputs and executing the associated logic statement, and then stepping to the next rung.

As such, it is relatively easy to draw a simple schematic diagram using standard symbols for each logic statement, and despite its length, this diagram is fairly easy for an experienced technician to grasp and follow. One drawback is that each ladder-rung function had to be manually hardwired by patch cords. This often took time, was error prone, was difficult to debug once wired, and could be painful to troubleshoot if there was an operational problem, flaw in the initial logic plan, or failure. Even worse, it could take hours or days to implement any changes. The primary problem wasn't ladder logic itself: it was the need to hand-wire the circuitry which implemented the logic of those rungs.

1. History of the PLC

2. The Evolutionary PLC: Past, Present, and Future

6. The Father of Invention: Dick Morley looks back on the 40th anniversary of the PLC

Re: How the PLC Revolutionized Industrial Process Control
#1

Glad you clarified for readers (at least indirectly), that PACs "are complete, specialized computers optimized for industrial control ..."

Re: How the PLC Revolutionized Industrial Process Control
#2

Recently I got interested in PLC programming and I'm wondering if it's possible to learn it by oneself with having a degree. I know that many people managed to learn programming without going to a college I myself managed to learn how to code in python and c# by only reading books and taking various courses from sites like Udemy, Linda, etc. I have two questions:
1.) How difficult it would be to get started with plc programming and how different is from software engineering?
2.) Where can I find a good and preferably not too expensive PLC just to get started ? AutomationDirect, Famaga is there a better option?

Re: How the PLC Revolutionized Industrial Process Control
#3
In reply to #2
BIN95

The biggest difference for a programmer would be understanding ladder logic. Once that is learned, the rest of learning PLC programming will be easy for a typical programmer.

The AD is a good choice. But before you buy hardware, I would first take a basic course with simulations for a better (and quicker) understanding of PLC programming.