Researchers at the Georgia Institute of Technology in the U.S. have created a simple and scalable method to recycle thermoset carbon fiber composite materials. 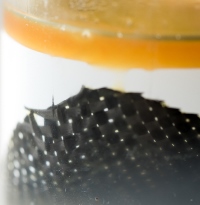 A piece of carbon fiber composite immersed in alcohol. Source: Rob Felt/Georgia TechCarbon fiber increasingly is being used in industrial and commercial applications, especially in aircraft and automobile manufacturing, due to its light weight and strength. However, unlike plastics and metals, it’s not easily recyclable. That’s because it remains difficult to strip the carbon fibers from the bonding agents that hold the material together.

“The polymer matrix is usually crosslinked, and it can’t be simply melted,” says lead researcher Jerry Qi, professor at the George W. Woodruff School of Mechanical Engineering at Georgia Tech.

Researchers focused on carbon fiber that uses a type of epoxy called vitrimer epoxy to give the composite material its shape.

“Vitrimers contain dynamic bonds that can alternate their structure without losing network integrity under certain conditions,” says researcher Kai Yu. “We let alcohol, which has small molecules, to participate in the network of alternating reactions, which effectively dissolved the vitrimer.”

The recycling process reportedly is simple to operate and scalable, and has the potential to reduce the thousands of tons of carbon fiber waste generated annually.

By posting a comment you confirm that you have read and accept our Posting Rules and Terms of Use.
Advertisement
RELATED ARTICLES
Recyclable and fire resistant plastic recycled by being dissolved in superfludic fluid
Recycling Carbon Fiber
An Inside Look at Carbon Fiber (and How It Can Change the Planet)
How Composite Materials Challenge the Automotive Manufacturing Industry - Part 1 Cost Barriers
Glass Fiber Coating Strengthens Composite Material
Advertisement