Silver nanowires may prove to be an ideal material for flexible, touchscreen technologies and a potential substitute for indium tin oxide (ITO), which is expensive to source and process and often is brittle.

A team from the University of Surrey, and in collaboration with touch-sensor manufacturer M-SOLV Ltd., looked to alternative materials to overcome the challenges of ITO, which can suffer from supply uncertainty. Their investigation showed how silver nanowire films—a material that consists of wires over a thousand times thinner than a human hair that form an interconnected conductive network—have emerged as a possible replacement due to transmittances and conductivities that can exceed those of ITO. 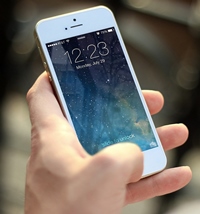 Silver nanowires may be a viable replacement touchscreen material. Image credit: Pixabay.“Our research hasn’t just identified silver nanowires as a viable replacement touchscreen material, but has gone one step further in showing how a process called ‘ultrasonication’ can allow us to tailor performance capabilities," says Matthew Large of the university's Department of Physics. By applying high-frequency sound energy to the material, researchers manipulate how long the nanosized “rods” of silver are. This allows them to tune how transparent or how conductive the films are. Researchers say this is vital for optimizing the materials for future technologies like flexible solar cells and rollable electronic displays.

In a paper published in Materials Today Communications, the team showed how silver nanowires could be processed using the same laser ablation technique commonly used to manufacture ITO devices. Using this technique, the team produced an operational, five-inch multi-touch sensor virtually identical to those typically used in smartphone technology. They found it performed comparably to one based on ITO but used less energy in its production.

The team is now looking to develop the scalability of the process to make it more industrially viable. One limiting factor is the current cost of silver nanowires. Funded by Innovate UK and EPSRC, the researchers are collaborating with M-SOLV and graphene supplier Thomas Swan to use a combination of nanowire and graphene in the electrodes to cut costs.

By posting a comment you confirm that you have read and accept our Posting Rules and Terms of Use.
Advertisement
RELATED ARTICLES
Nanowire Inks for Paper-Based Printable Electronics
Correlated Metals Could Enable Less-Expensive Displays
Recycling nanowires from electronic devices
Bus bars on glass for transparent conductive coatings
Tuning Windows for Privacy Using Nanowires
Advertisement