Fish-Eye Lens Cuts Through the Dark

University of Wisconsin–Madison engineers have combined the best features of a lobster and an African fish to create an artificial eye that can see in the dark. The technology could help search-and-rescue robots and surgical scopes alike to function optimally in a dimly lit environment.

“These days, we rely more and more on visual information. Any technology that can improve or enhance image taking has great potential,” says Hongrui Jiang, professor of electrical, computer and biomedical engineering, who led the research. 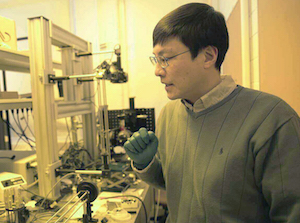 Professor Hongrui Jiang drew inspiration from the eyes of lobsters and elephantnose fish. Image credit: Stephanie Precourt.Most attempts to improve night vision have sought to tweak the “retinas” of artificial eyes—for example, by changing the materials or electronics of a digital camera’s sensor—so they respond more strongly to incoming packets of light. However, Jiang’s group, rather than interfering with efforts to boost sensitivity at the back end, set out to increase the intensity of incoming light through the front end—the optics that focus the light on the sensor.

Jiang's team emulated the eye structure of the elephantnose fish—whose retinas are composed of thousands of tiny crystal cups that help it to see in murky waters—by engineering thousands of miniscule parabolic mirrors, each the size of a grain of pollen. They then shaped arrays of the light-collecting structures across the surface of a uniform hemispherical dome. The arrangement, inspired by the superposition compound eyes of lobsters, concentrates incoming light to individual spots, further increasing intensity.

“We showed fourfold improvement in sensitivity,” says Jiang. “That makes the difference between a totally dark image you can’t see and an actually meaningful image.”

Although superposition compound eyes are extremely sensitive, they typically suffer from less-sharp vision. Increased intensity costs clarity when significant amounts of light are compressed down to individual pixels. To recover lost resolution, Jiang’s group captured numerous raw images and processed the set with an algorithm to produce crisp, clear pictures.

By posting a comment you confirm that you have read and accept our Posting Rules and Terms of Use.
Advertisement
RELATED ARTICLES
Clear, Panoramic View from Miniature Lenses
Artificial Iris Adjusts to Incident Light
Alternative Nuclear Detection Material
Technology Could Make Aircraft and Ships Stealthier
Watch: Doctors View the Entire Eye with New Optical Device
Advertisement