Researchers at Stanford University have posted a video showing six micro-robots totaling 3.5 ounces in weight towing a 3,900-pound vehicle—evidence of their success in marshaling the group effort ants demonstrate in moving objects many times heavier than themselves.

The video was released as an adjunct to “Let’s All Pull Together: Principles for Sharing Large Loads in Micro-Robot Teams”—a paper published by engineers from the university's Biomimetics and Dexterous Manipulation Lab (graduate student David Christensen, lead author) in IEEE Robotics and Automation Letters—which the group will present in May at the International Conference on Robotics and Automation, in Stockholm. 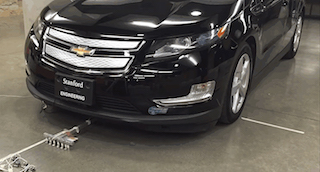 Six micro-robots totaling 3.5 ounces in weight tow a 3,900-pound vehicle. Image credit: Stanford University/BDML.Ants are known for their impressive strength and can lift over 100 times their own weight. A swarm of ants working together as a team can move comparatively large objects, such as a giant millipede. When there is no more space for additional ants to grab on to the object itself, they make strong chains by grabbing on to each other.

After studying such behavior, the Stanford engineers tried to simulate those achievements with micro-robots. Experimenting with different kinds of micro-robots, the scientists found that certain, shorter-legged robots, while individually strong, tended to move in a "jerky" motion and didn't synchronize to pull heavy objects particularly well.

Longer-legged "running robots," however, were found to apply forces over a longer period of time. Although the forces individually weren't very strong, their efforts "overlapped" to create better teamwork.

After a series of experiments, the scientists found that the way for robots to work together as a team was to use a very long, very slow, but very steady "winching gait," as shown in the video. Using a special adhesive inspired by gecko toes—which was also developed in their laboratory—the "micro-tugs" were able to move an object almost 18,000 times their collective weight.

By posting a comment you confirm that you have read and accept our Posting Rules and Terms of Use.
Advertisement
RELATED ARTICLES
Micro-robots Poised for Big Growth
Mini Search and Rescue Robot Inspired by Nature
Working Together, These Robots Solved a Problem
Powerful Nano-Engines Are Really ANTs
Nature-Inspired Engineering Design
Advertisement