MIT researchers have discovered that adding a tiny quantity of carbon nanotubes to the aluminum used in nuclear reactors can dramatically slow the breakdown of the metal, potentially extending reactors' operating lifetimes.

For now, the method has proved effective only for aluminum, which limits its applications to the lower-temperature environments found in research reactors. But the team says the method may also be usable in the higher-temperature alloys used in commercial reactors.

One of the main reasons for limiting the operating lifetimes of nuclear reactors is that metals exposed to the strong radiation environment near the reactor core become porous and brittle, which can lead to cracking and failure. Helium from radiation transmutation takes up residence inside metals and causes them to become riddled with tiny bubbles along grain boundaries and progressively more brittle.

The nanotubes, despite making up only a small fraction of the volume—less than 2%—can form a percolating, one-dimensional transport network to provide pathways for the helium to leak back out instead of being trapped within the metal, where it can continue to do damage. 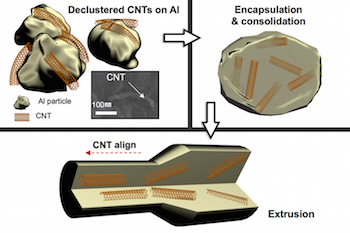 An example of how the researchers created aluminum with carbon nanotubes inside. Image credit: MIT.Testing showed that after exposure to radiation, the carbon nanotubes within the metal can be chemically altered to carbides, but they still retain their slender shape, “almost like insects trapped in amber,” says Ju Li, MIT professor of materials science and engineering. “It’s quite amazing—you don’t see a blob; they retain their morphology. It’s still one-dimensional.”

The huge total interfacial area of these 1D nanostructures provides a way for radiation-induced point defects to recombine in the metal, alleviating a process that also leads to embrittlement. The researchers showed that the 1D structure was able to survive up to 70 displacements per atom of radiation damage.

After radiation exposure, Li says, there are pores in the control sample, but no pores in the new material, “and mechanical data shows it has much less embrittlement.” For a given amount of exposure to radiation, the tests have shown the amount of embrittlement is reduced about five to tenfold.

The new material needs only tiny quantities of carbon nanotubes (CNTs)—about 1% by weight added to the metal—and these are inexpensive to produce and process, the team says. The composite can be manufactured at low cost by common industrial methods and is already being produced by the ton by manufacturers in South Korea for the automotive industry.

Even before exposure to radiation, the addition of this small amount of nanotubes improves the strength of the material by 50% and also improves its tensile ductility—its ability to deform without breaking—the team says.

While the material used for testing was aluminum, the team plans to run similar tests with zirconium, a metal widely used for high-temperature reactor applications such as the cladding of nuclear fuel pellets. “We think this is a generic property of metal-CNT systems,” says MIT postdoc Kang Pyo So.

By posting a comment you confirm that you have read and accept our Posting Rules and Terms of Use.
Advertisement
RELATED ARTICLES
Study: Golden nanotubes may kill cancer cells from within
NASA Studies High-Altitude Radiation
Graphene and nanotubes combine to improve energy harvesting devices
Ionizing vs non-ionizing radiation: Risks and safety tips
Metal Nanocomposites May Tame Helium in Fusion Reactors
Advertisement