Up to 5,000 job vacancies in the UK automotive industry could be due to a skills shortage affecting the sector, according to a new report published by the Automotive Council.

The report surveys a range of British-based automotive firms, from vehicle manufacturers to component suppliers, to identify the areas of employment most difficult to recruit for and to provide a means for industry and government to tackle the skills issue.

Of the top 10 job types for which recruitment is most difficult, the majority are in engineering—with the top two in-demand roles identified as design and production engineers. Around 19% of the unfilled vacancies cited in the report are identified as "critical" and having a significant impact on company operations. 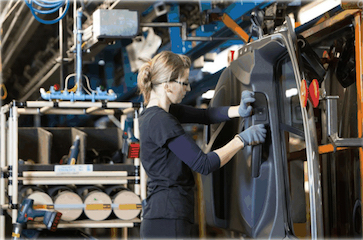 19% of vacancies are identified as "critical," with significant impact on company operations. Image credit: Automotive Council.The flow-on effect, according to the report, is that companies are hiring temporary contractors and increasingly recruiting from abroad.

2015 was the most productive in a decade for the UK auto industry, with 1.59 million vehicles built, and volumes are forecast to reach a record two million by 2020. But this success could be undermined by the lack of skilled engineers to fill new jobs, despite efforts made by companies to increase training and apprenticeships, the study finds.

“The automotive industry has already invested heavily in apprenticeships and training for existing staff to grow and develop a new generation of skilled workers. However, even more support is needed," says Mike Hawes, chief executive of SMMT, which compiled the report. "Future schemes must focus on quality not just quantity—and more support is needed to promote STEM subjects in schools.”

In addition to the new personnel required, there are also many new training requirements due to the adoption of new automotive technologies in the industry. According to the study, 71 different types of learning are required for more than 20,000 people working in the industry—15% of whom have an immediate need for new training. The most critical training requirements are in lean manufacturing (minimizing waste), advanced problem solving, and tool making.

The report sets out a range of recommendations to tackle the skills shortage, including implementation of a coordinated approach to STEM subjects in schools and ensuring that government-sponsored apprenticeship opportunities are fully utilized.

By posting a comment you confirm that you have read and accept our Posting Rules and Terms of Use.
Advertisement
RELATED ARTICLES
The Slow Emergence of Mechatronics as an Engineering Discipline
US tech companies facing hiring skills gap
Low Pay, Not Education, to Blame for STEM Skills Gap: Study
Lack of STEM skills not a major factor in hiring gaps
IT Workers in Great Demand; Everyone Else? Not So Much
Advertisement