A U.S. Defense Advanced Research Projects Agency (DARPA) program aims to develop an implantable neural interface able to provide signal resolution and data-transfer bandwidth between the human brain and the digital world. The interface would serve as a translator, converting between the electrochemical language used by neurons in the brain and the “ones and zeros” that constitute the language of information technology. The goal is to achieve this communications link in a biocompatible device no larger than one cubic centimeter in size. 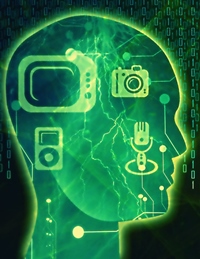 “Today’s best brain-computer interface systems are like two supercomputers trying to talk to each other using an old 300-baud modem,” says Phillip Alvelda, NESD program manager. “Imagine what will become possible when we upgrade our tools to really open the channel between the human brain and modern electronics.” Among the program’s potential applications are devices that could compensate for deficits in sight or hearing by feeding digital auditory or visual information into the brain at a resolution and experiential quality far higher than is possible with current technology.

DARPA says that the neural interfaces currently approved for human use are forced to squeeze information through 100 channels, with each aggregating signals from tens of thousands of neurons at a time. The result can be noisy and imprecise. In contrast, the NESD program aims to develop systems that can communicate clearly and individually with any of up to one million neurons in a given region of the brain.

According to DARPA, achieving the program’s goals and ensuring that the devices will have the potential to be practical outside of a research setting will require breakthroughs across a number of disciplines, including neuroscience, synthetic biology, low-power electronics, photonics, medical device packaging and manufacturing, systems engineering and clinical testing. In addition to the program’s hardware challenges, NESD researchers will need to develop advanced mathematical and neuro-computation techniques to transcode high-definition sensory information between electronic and cortical neuron representations, and then compress and represent those data with minimal loss of fidelity and functionality.

To accelerate that integrative process, the NESD program aims to recruit leading industry stakeholders willing to offer prototyping and manufacturing services and intellectual property to NESD researchers on a pre-competitive basis. In later phases of the program, these partners could help transition the resulting technologies into research and commercial application.

By posting a comment you confirm that you have read and accept our Posting Rules and Terms of Use.
Advertisement
RELATED ARTICLES
Revealing the brain’s mysteries, one neuron at a time
Sikorsky Gets Green Light for Aircraft Automation Program
Brain-controlled Robotic Hand Restores Sense of Touch
Missile defense systems could learn a lot from a dragonfly
DARPA Embraces the Biotech World
Advertisement