Engineering and environmental consultancy Ricardo will partner with the Gas Technology Institute (GTI) on two projects to help develop natural gas engines as a viable lower-emission alternative to diesel power for medium- and heavy-duty commercial vehicles on California highways.

Diesel trucks can be major contributors to emissions of nitrogen oxides (NOx), greenhouse gases and diesel particulate matter. According to the California Air Resources Board, by 2031 the South Coast Basin will exceed mandatory air quality standards unless NOx emissions are reduced by 90% from current levels. 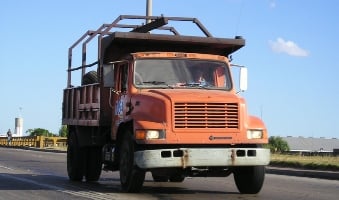 Diesel trucks are major contributors to California NOx emissions. Image credit: Morguefile.In the first project, Ricardo will test two different ignition systems—high frequency discharge and pulsed nano plasma—to gauge their effect on engine performance. The company will also support GTI in developing an ultra-low-emission natural gas engine for on-road class 4-7 medium- and heavy-duty trucks. Such vehicles are currently among the top 10 sources of NOx emissions in California’s South Coast Air Basin. They are projected to remain one of the largest sources, even as the legacy fleet of older and higher-polluting vehicles is replaced by vehicles meeting 2010 emissions standards.

Both projects will be co-funded by Southern California Gas Co.

According to Ricardo President Clive Wotton, medium- and heavy-duty trucks are not as amenable to the electrification and hybridization that have been applied in the passenger car and SUV sectors. Substituting natural gas for diesel as a transportation fuel for these truck classes offers "some attractive potential benefits in reducing NOx emissions," he says.