A drone that automatically recognizes and tracks specific odors has been under development by a team at Osaka University, SoftBank Corporation and Tokyo Institute of Technology.

According to its developers, the drone could one day be used to track chemical plumes during search and rescue missions, or missions designed for protecting the environment. 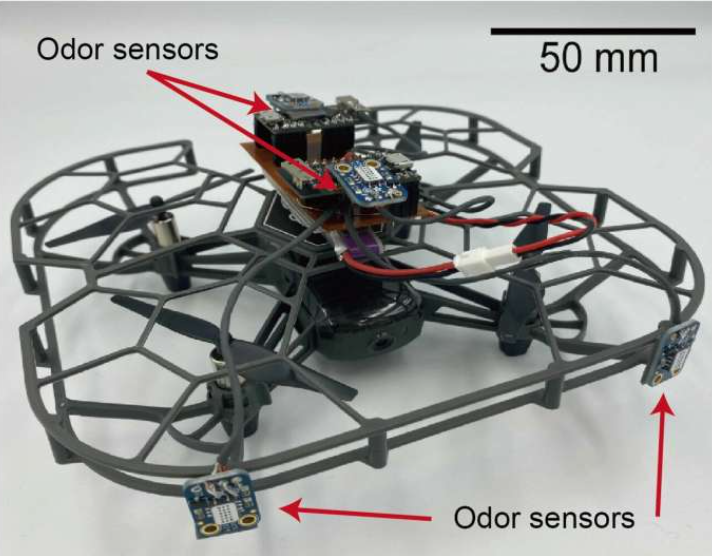 The small drone, which fits in the palm of a hand, was developed based on particle image velocimetry, which is an airflow visualization technology that measures the velocity field of an entire region in the air flow at once. Specifically, the technology enabled researchers to identify the direction that chemical plumes arrive from.

To enable the drone to detect the direction of chemical plumes and thus their source, odor sensors were fitted on various surfaces of the handheld device. To achieve the appropriate sensor arrangement, the team developed 3D surge-casting algorithms, which were inspired by the very mechanisms by which moths track chemical plumes.

"The strength of our research group is that we are good at airflow visualization technology," the researchers explained. "Focusing on the changes in airflow produced by a drone, we noticed that the drone intakes odor differently depending on the height of the odor source. Therefore, we designed an odor sensor arrangement and an algorithm that can continuously track an odor regardless of what direction it comes from."

Consequently, the researchers concluded that the combination of the sensor arrangement and the algorithm led to successful odor source localization. Going forward, the team wants to create a system that can quickly search for dangerous chemicals or explosives by using drone swarms to search for multiple odor sources at once.

The article detailing the palm-sized drone, Palm-Sized Quadcopter for Three-Dimensional Chemical Plume Tracking, appears in the journal IEEE Transactions on Instrumentation and Measurement.

For more on the handheld drone, watch the brief accompanying video that appears courtesy of researcher Shigaki Shunsuke.