The first private sector supplies of tri-structural isotropic particle fuel (TRISO) will be produced at the Pilot Fuel Manufacturing (PFM) facility recently opened by Ultra Safe Nuclear Corporation in Oak Ridge, Tennessee. The fully ceramic-microencapsulated fuel will be tested for use in the company's advanced Micro Modular Reactor (MMR). 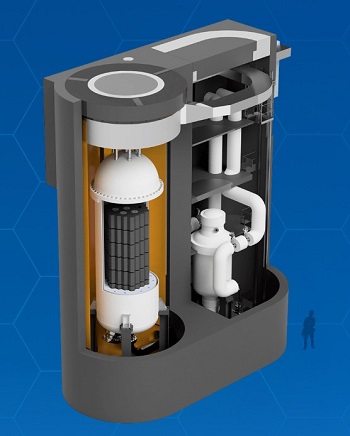 The fuel produced will power the MMR. Source: Ultra Safe Nuclear Corporationdiffusion plant, the PFM facility hosts production-scale modules that will produce the first TRISO-coated fuel particles. These particles will be packed into 3D-printed silicon carbide shells to create fuel pellets ready for testing and qualification and for use in the 15 MW-thermal, 5 MW-electrical high-temperature gas-cooled, graphite-moderated MMR.

PFM is a radiological facility capable of producing kilogram quantities of fully ceramic-microencapsulated fuel, which incorporates TRISO fuel particles encased in a silicon carbide matrix. The fuel will be used in the MMR, a 15 MW thermal, 5 MW electrical high-temperature gas-cooled reactor. PFM will also codify and demonstrate the manufacturing modules that will be used in the company’s future commercial fuel manufacturing factory.

The Seattle-based company plans to demonstrate its MMR at the University of Illinois-Urbana-Champaign as a research and teaching reactor and at the Canadian Nuclear Laboratories.