Concentrated photovoltaic systems actively track the sun’s path to exploit direct solar radiation and maximize energy conversion efficiency. A passive and more cost-efficient approach to harnessing incident solar radiation was engineered at Stanford University in the form of a device to collect and concentrate light regardless of its angle and frequency.

The array of inverted-pyramid-shaped structures form the Axially Graded Index Lens (AGILE) designed to collect sunlight from any angle and funnel it toward the solar cell beneath. AGILE designs were 3D printed 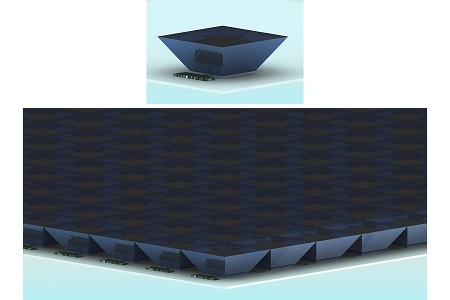 As reported in the journal Microsystems & Nanoengineering, prototypes captured over 90% of the light that hit the surface and created spots at the output that were three times brighter than the incoming light. Installed in a layer on top of solar cells, these structures could render solar arrays more efficient and capture not only direct sunlight, but also diffuse light that has been scattered by the atmosphere.

A top layer of AGILE could replace the existing encapsulation that protects solar arrays, eliminating the need for solar tracking. Inclusion of these lenses offer additional benefits in the creation of space for cooling and circuitry to run between the narrowing pyramids of the individual devices and by reducing the amount of solar cell area needed to produce energy. Cosmic applications for AGILE are also envisioned: applied to solar arrays being sent into space, an AGILE layer could both concentrate light without solar tracking and provide necessary protection from radiation.