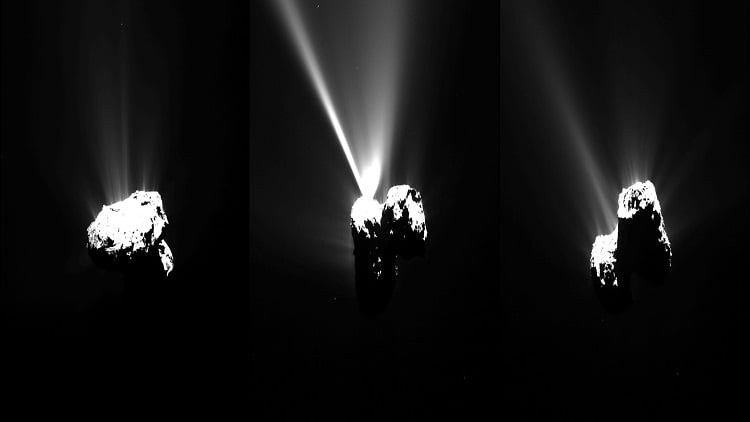 Images of Comet 67P/Churyumov–Gerasimenko captured by Rosetta’s OSIRIS narrow-angle camera just a few hours before the comet reached perihelion. The images were taken from a distance of about 330 km from the comet. Source: ESA/Rosetta/MPS for OSIRIS Team MPS/UPD/LAM/IAA/SSO/INTA/UPM/DASP/IDA

The European Space Agency’s (ESA’s) Rosetta mission orbited Comet 67P/Churyumov-Gerasimenko during 2014 through 2016, amassing a vast library of images. Researchers are particularly interested in examining surface landscape changes revealed in images documented under different solar illumination conditions. Citizen scientists are being called upon to lend their eyes and analytical talents to the interpretation of these cosmic close-ups.

"In the past few years, astrophotographers and space enthusiasts have spontaneously identified changes and signs of activity in Rosetta's images. Except for a few cases, though, it has not been possible to link any of these events to surface changes, mostly due to the lack of human eyes sifting through the whole dataset. We definitely need more eyes!" said Bruno Merin, head of ESA's European Space Astronomy Centre in Spain.

ESA partnered with the Zooniverse, a popular platform for people-powered research, to launch the Rosetta Zoo, a compendium of pairs of images collected by Rosetta's OSIRIS camera showing Comet 67P's surface before and after perihelion — the comet’s closest approach to the sun. Interested participants can view images of roughly the same region side by side in order to identify changes ranging from large-scale dust transport to comet chunks that moved or even vanished.

"What does a primitive comet look like? No one knows, but with the help of volunteers we can characterize how comets evolve now and understand the physics driving those changes: then we will be able to rewind the movie of cometary evolution all the way back to the origin of the Solar System," comments planetary scientist Jean-Baptiste Vincent from the DLR Institute of Planetary Research in Berlin, Germany.

By posting a comment you confirm that you have read and accept our Posting Rules and Terms of Use.
Advertisement
RELATED ARTICLES
See All Archived Images from ESA's Rosetta Mission
The Precision (and Promise) of the James Webb Space Telescope
Solar-powered Spacecraft Notches Record
Biomimetic Silk Moth Fibers Provide Potential for New Textiles, Image Transport
'Out of this World' AI Impacts the Future of Space Tech
Advertisement