Walter Isaacson3 recounts the series of disruptive technologies that have led to the current “digital revolution.” His story begins with Ada, Countess of Lovelace (daughter of the poet Lord Byron), who in 1842 published a seminal work on the theoretical possibility of building a computer to perform logical operations rather than just arithmetic. It took a hundred years before her insight led to a machine that could do just that. 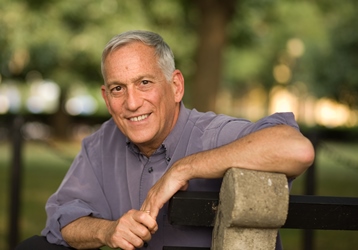 Author Walter Isaacson writes about the series of disruptive technologies that have led to the current digital revolution. Image source: aspeninstitute.org/Patrice GilbertIsaacson looks in depth at the unique circumstances that produced the history of innovations. This history provides a wealth of insight into how innovation has actually occurred and offers a good starting point for understanding how to structure an innovation-friendly organization.

Isaacson tells story after story of how disruptive breakthroughs have occurred through the work of people of strong passions and intellects, such as the three men credited with inventing the transistor—one of the most disruptive technologies of modern times. They were men “…whose personalities both complemented and conflicted with one another.”4

William Shockley was hired at Bell Labs in 1936 to find a solid material to replace vacuum tubes. His theoretical understanding of quantum theory made him a good candidate for that task. The project was interrupted by World War II, but taken up in earnest afterward. Two men were brought on to assist Shockley. One was Walter Brattain, a skilled experimenter, and the other, John Bardeen, who in addition to being a quantum theorist, could collaborate easily with experimenters as well as other theorists. The three met daily for impromptu discussions and finally, in November 1947, they had a series of breakthroughs that led to the first working model of a solid-state amplifying device. The transistor was born.

After transistors, the next major disruptive breakthroughs in hardware were the microchip, followed by the microprocessor, which was invented at a small startup called Intel. The project team there was led by three people with different but compatible talents: Gordon Moore, “a brilliant scientist who knew how to drive the technology,” Robert Noyce, a scientist who was also “a visionary who knew how to inspire people and sell the company to others when it was just getting off the ground,” and Andy Grove, “a hard-charging, no-nonsense manager” who could focus on driving the project as a business.5 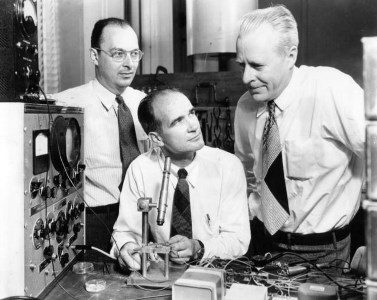 John Bardeen, William Shockley and Walter Brattain at Bell Labs, 1948. Image source: Wikipedia.orgThe lesson, repeated throughout Isaacson’s history, is that disruptive innovations have come from the work of teams of talented, highly motivated people. In short, an innovation-friendly organization should be structured to put together such teams and provide them with an environment that allows them to thrive.

Indeed, several themes run through the literature on structuring innovation-friendly organizations. For example:

Communication and collaboration are the vital ingredients for developing innovative projects. In order to encourage innovation within an organization, management “must ensure that responsibility for making the venture successful is given to an organization whose processes will facilitate what needs to be done and whose values can prioritize those activities. The theory is that the requirements of an innovation need to fit with the host organization’s processes and values, or the innovation will not succeed.”12

A central argument of The Innovator’s Dilemma is that disruptive innovations should be managed differently from innovations involving sustaining technology. The latter are improvements to core products that will be helpful to existing customers. The management of an already successful organization will no doubt be experienced in supporting these efforts. They will know the personnel who have succeeded with past development projects and they will understand the organizational structure needed to support them.

Disruptive technologies by definition differ from core products, so they bring in lower financial margins (at least in the beginning), and will have an unfamiliar customer base. It is therefore necessary to address “…a different set of customers—those who want the products of the disruptive technology.”13

In Democratizing Innovation,14 Eric Von Hippel writes: “Studies of innovating users (both individuals and firms) show them to have the characteristics of ‘lead users.’ That is, they are ahead of the majority of users in their populations with respect to an important market trend, and they expect to gain relatively high benefits from a solution to the needs they have encountered there.” The key point is that disruptive innovators must identify users who could benefit from their innovation and must work closely with them during development.

When asked whether he favors market research, Steve Jobs was once quoted as answering: “No, because customers don’t know what they want until we’ve shown them.”15 According to Christensen, this can only be done either by spinning off an independent organization or by acquiring an appropriately small company.16 Apple followed the latter approach when its engineers developed the iPhone. They bought a small company that had patents covering the kinds of multi-touch technology that were a major factor in the product’s development.

In looking back at the successful innovators and entrepreneurs in his history of the digital revolution, Isaacson says that most were people who cared about and deeply understood engineering and design. “When the sales guys run the company,” said Steve Jobs, “the product guys don’t matter so much, and a lot of them just turn off.” Larry Page of Google agreed: “The best leaders are those with the deepest understanding of the engineering and product design.”17

Workplace design has played an important role in supporting innovation by promoting unplanned interactions among people with different interests, styles and talents. The importance of this was an idea implemented by Steve Jobs when designing the headquarters building for Pixar, the animation company. Its corridors fed into a central atrium that contained meeting rooms, cafeteria, a coffee bar and—perhaps most importantly—the only restrooms on the floor. 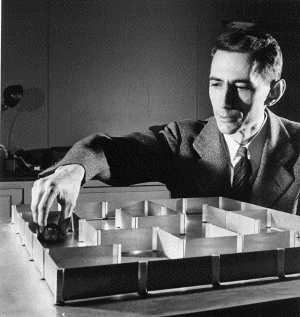 Bell Labs was not only the birthplace of the transistor, but also a series of other inventions. Its headquarters building in New Jersey was deliberately laid out to promote unexpected interactions. The corridors were long and designed to promote random meetings.

“Claude Shannon, the eccentric information theorist, would sometimes ride a unicycle up and down the corridors while juggling three balls and nodding at colleagues,”18goes one story. This kind of informal esprit de corps was clearly the objective of the leaders who designed that building. (Watch a video clip of Claude Shannon juggling.)

Building 20 was erected as a temporary facility to house the World War II “Rad Lab,” established to work on high-priority radar projects. The building was to be torn down after the war. Instead, it became the home of a rag-tag group of innovators from different academic departments. Building 20 was the site of MIT’s well-known linguistics program, which was developed through the interactions of Morris Halle and Noam Chomsky, who had adjacent offices for more than 30 years.19

Although they specialized in different areas of linguistics, they spent much of their time in discussion. “We became great friends,” Halle says. “And friends shouldn’t be shy about telling each other when they are wrong. What am I supposed to do? Not tell him he’s got a bad idea?”20

Building 20 was the birthplace of Bose Electronics, one of the first video games, advances in high-speed photography, as well as developments in the theory and use of microwaves. One engineer who worked there for many years explained that, “In a vertical layout with small floors, there is less research variety on each floor. Chance meetings in an elevator tend to terminate in the lobby, whereas chance meetings in a corridor tended to lead to technical discussions.”21

Building 20 at MIT was a hotbed of innovation. The structure was torn down in 1996. Image source: 1964 MIT alum class.

The role of research in fostering innovation is both important and problematic. It requires a financial commitment without any promise of achieving a payoff. At a discussion of the relation of basic research to practical commercial uses held at the City University of New York Graduate Center, a panel of mathematical physicists addressed this question.22 Although the three panelists had highly theoretical backgrounds, one was director of research at Microsoft, one led a group at Google investigating the structure of language and the third was chief data scientist for the New York Times.

Jennifer Tour Chayes of Microsoft recounted a project to deal with a data problem. In short, given the importance of cloud computing, huge amounts of stored data could be lost due to a power outage, requiring that all files be restored from scratch. She convened her group of theorists and put the problem to them. One “deep theorist” in the area of coding theory came up with an idea that would simplify restoring the lost data. Chayes estimated that the system developed from this insight saved more than $500 million over the span of a few years. She commented that for deep, curiosity-driven research, the answers often exist before the questions even come up.

Fernando Pereira of Google said, “Even the best-run enterprise fails most of the time…in industry as in science you have to test hypotheses. Too often, those who hold the purse strings forget about that. Advances have often come from accidental discoveries.”

According to Chayes, an organization should view its investments in innovation like a balanced stock portfolio: invest a lot in development of marketable products, a fraction of that in research and a very small fraction of that in highly theoretical esoteric research “from which the odds of realizing anything are quite small, but if they do, it could be huge.”

Summing It All Up

There are several takeaways from this overview of approaches to fostering innovation across an organization.

By posting a comment you confirm that you have read and accept our Posting Rules and Terms of Use.
Advertisement
RELATED ARTICLES
Looking Outside the Profession for Innovation
Disruptive Innovation Faces An Uphill Battle in Building and Construction
IEEE Initiative Announced to Boost 5G Innovation
Energy Department Offers $125mn for Disruptive Technologies
Innovation, Engineering and the Arts
Advertisement