A city within, and on top, of a city is growing on the west side of midtown Manhattan. Its realization, still a decade away, could rank among one of the great engineering feats in U.S. history and, its proponents say, will help drive and accommodate economic, cultural and residential expansion for New York City in the 21st century.

The largest development in New York City since Rockefeller Center, the Hudson Yards Redevelopment Project will incorporate over 17 million square feet of commercial and residential space, more than 100 shops, a collection of restaurants, approximately 5,000 residences and 14 acres of public open space. 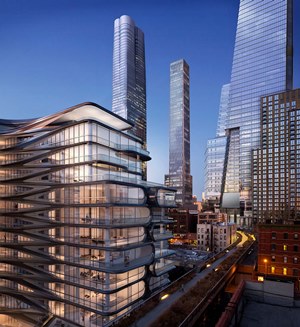 Artist’s view of Hudson Yards looking north. Image credit: Related-Oxford.One problem is that the Long Island Rail Road (LIRR) commuter system—North America’s busiest, with 350,000 riders daily—runs through the construction site (bounded by West 30th Street to the south, West 33rd Street to the north, 10th Avenue to the east and 12th Avenue to the west). To solve the problem, two “platforms” will be built to bridge 30 active LIRR train tracks, three subsurface rail tunnels used by Amtrak and New Jersey Transit and a fourth passageway--the Gateway tunnel--completed in late 2014. The platforms will cover approximately three-quarters of the eastern and western yards. Throughout the project’s construction, the LIRR, Amtrak and New Jersey Transit trains will remain operational.

The Eastern Rail Yard platform alone will comprise a 10-acre deck capable of supporting six acres of open space, four towers, a cultural center and 1 million square feet of retail and restaurants. The platform and buildings above the eastern yard will be supported by 300 caissons, ranging from four to five feet in diameter and 20 to 80 feet in depth, that will be drilled deep into the bedrock between existing railroad tracks.

The caissons are effectively underground concrete columns with steel bars inside of them shaped like cages that contain more steel. The caisson locations will support the buildings while they avoid conflicts with the existing tracks and utilities below.

Creation of the structural supports for the rising city isn't the only engineered aspect of the project. Its developers are intent on creating a model "smart city" that will use big data and electronics to integrate the functioning of buildings, streets, parks, utilities and public spaces to a degree and scope never before attempted in the U.S. Among the smart features:

By posting a comment you confirm that you have read and accept our Posting Rules and Terms of Use.
Advertisement
RELATED ARTICLES
Engineering a Rail Tunnel to Manhattan
Top 10 Tallest (Completed) Buildings in the World
Hudson River Rail Tunnel Moves Forward with EIS Report
A Shipping Rebound on New York's Canals
U of Michigan to anchor a $300 million innovation center
Advertisement