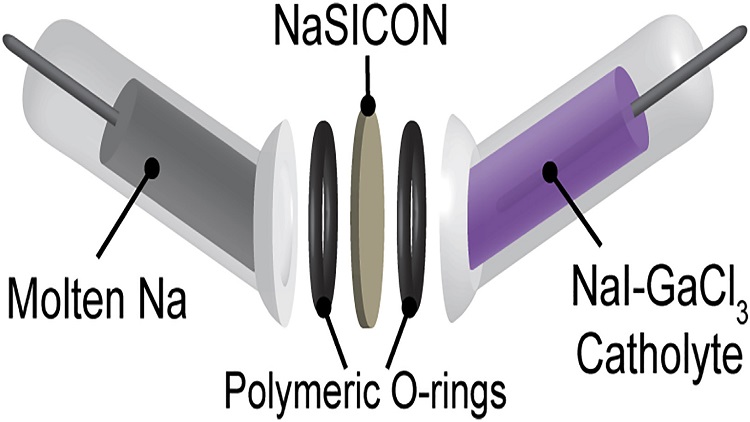 Cooler operating temperatures permit use of less expensive materials and insulation in a design that eliminates the risk of thermal runaway. At 3.6 V, the new sodium-iodide battery has a 40% higher operating voltage than a commercial molten sodium battery. This voltage leads to higher energy density and can translate into the need for fewer cells, fewer connections between cells and an overall lower unit cost to store the same amount of electricity.

The design is based on the use of a liquid mixture of two salts: sodium iodide and gallium chloride. As energy is discharged from the new battery, sodium metal produces sodium ions and electrons while electrons transform iodine into iodide ions. The sodium ions move across a separator to the other side and react with the iodide ions to form molten sodium iodide salt. A redesigned ceramic separator allows only sodium ions to move from side to side.

Laboratory tests reported in Cell Reports Physical Science document successful charging and discharging of the battery more than 400 times over an eight-month period.