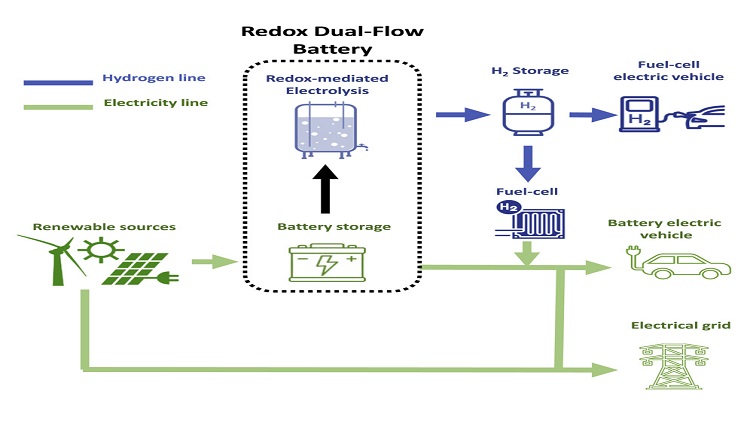 The dual-circuit redox flow battery offers the advantage of two discharging modes, enabling the system to store energy beyond the energy capacity of the electrolytes in the form of renewable hydrogen energy storage. Augmented by the catalytic reactors, the system includes a secondary energy platform in which electrochemical energy can be converted into renewable hydrogen by water-splitting using redox electrocatalysis. A redox mediator on solid electrocatalyst particles in each reactor supports the electrochemical water spitting process.

The battery demonstrated great stability over 50 cycles and an average energy efficiency of 68% at a current density of 50 mA/cm2 and a water-splitting voltage efficiency of 64.1%. The hydrogen production and energy storage technology described in Cell Reports Physical Science is envisioned to be deployed in the transportation sector.

By posting a comment you confirm that you have read and accept our Posting Rules and Terms of Use.
Re: Battery system stores power and produces hydrogen
#1

A well-written report of a promising lab study. It gave thorough documentation of methods, materials, and results--so others could replicate the experiments. This sort of approach reduces the fire risk of lithium-only battery technologies and provides energy storage in an electrochemical form (battery) and a chemical form (hydrogen gas). The hydrogen gas is substantially more pure than what is produced by more typical forms of water electrolysis.

Possible difficulties will include the scaling-up of this process, availability of some of the components and chemicals, ensuring containment of any chemicals (3M sulfuric acid is one), and long-term (5-15 year) cost/benefit data.