Researchers from the Korea Institute of Machinery and Materials (KIMM) created a process with renewable energy that can produce ammonia at room temperature and with normal pressure. This process has zero carbon emissions and would contribute to achieving carbon neutrality in the future.

The current organic method to synthesize ammonia is called the Haber-Bosch method, which was developed in 1913. This process yields ammonia as fertilizer and greatly increased agricultural productivity.

In recent years, ammonia has been receiving attention as eco-friendly, zero carbon emissions fuel because it doesn’t emit carbon dioxide when burned. But, synthesizing ammonia with the Haber-Bosch method uses high pressure and high-temperature conditions which require large amounts of energy and produce high levels of carbon dioxide. The Haber-Bosch method consumes 1.8% of the world’s energy and produces 1.8% of CO2 emissions. 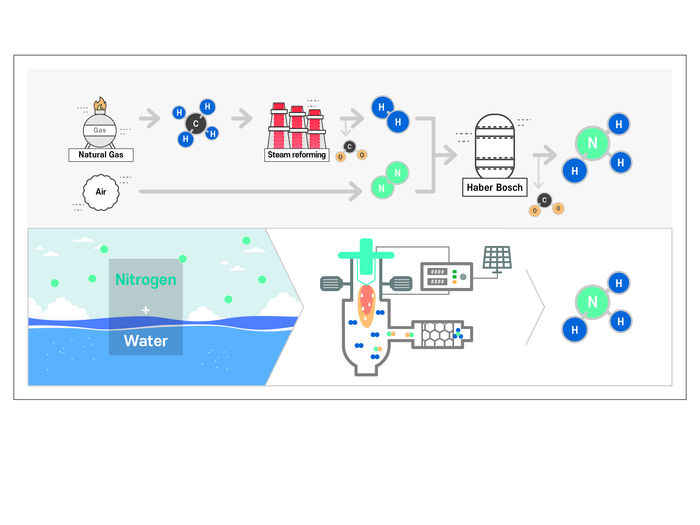 The heat generated during plasma decomposition is used for catalytic synthesis process. This process can achieve a yield 300-400 times greater than current ammonia production tech alternatives to the Haber-Bosch method. The by-product is an aqueous solution of nitrate that can be used as an agricultural nutrient solution and oxidizing agent.

The new process can be expended on a large scale through a modular system because the reaction occurs with water and nitrogen at room temperature and room pressure conditions.

The team is currently working on improving the cost and efficiency of ammonia production by developing scale-up and commercialization technology. They hope to collaborate with other engineering companies in expending efforts to ammonia plants.

A paper on this research was published in ACS Energy Letters.

By posting a comment you confirm that you have read and accept our Posting Rules and Terms of Use.
Advertisement
RELATED ARTICLES
Reducing the environmental impact of ammonia production
New Method For Producing Ammonia is Eco-friendly and Happens on the Small-scale
Imitating Nature to Produce Ammonia
Ammonia, Renewables Combine in Energy Storage Demonstrator
A process for decentralized ammonia fertilizer manufacturing
Advertisement