Increased deployment of renewable energy systems has coincided with expanded options for energy storage. However, economic factors can limit the use of grid-scale battery banks, and pumped hydro is primarily feasible only in mountainous areas. A lower cost storage system that can serve coastal areas or islands without mountains is proposed by an international research team: Buoyancy Energy Storage Technology (BEST). 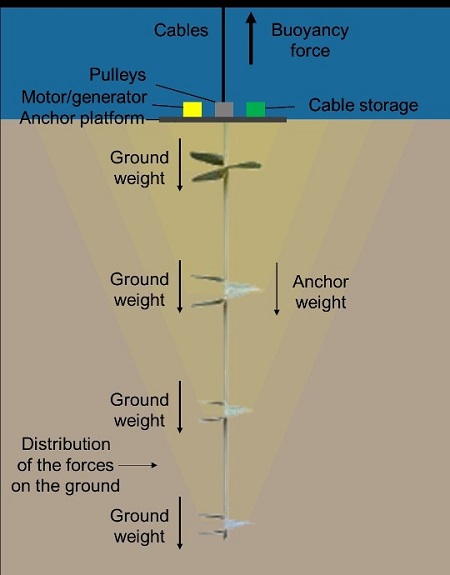 The BEST design starts with a platform secured to the sea floor with weighted anchors and connected via cables to a 100 m2 square array of high-density polyethylene pipes, each filled with a compressed gas. Electricity transmitted from the surface via power cables drives powerful electric motors, which pull the buoyant tubes down toward the sea floor to store the energy. When stored energy is needed, the tubes are released, enabling their buoyancy to pull the motors in reverse, turning it into a generator and feeding power back into the grid.

Simulations indicate that the deeper the system, the less the volume of compression gases varies with depth and the more energy the system stores. While installing the system at greater depth increases overall cost, use of a BEST system to store energy incurs a lower per MWh cost compared to that of using conventional battery systems.