Seawater air-conditioning is a cool concept

The potential to replace conventional air-conditioning with a renewable and less cost-intensive technology based on seawater air-conditioning (SWAC) was demonstrated by an international research team. This cooling approach entails pumping seawater from ocean depths of around 700 m to 1200 m at temperatures of 3° C to 5° C to the coast, where it exchanges heat with a district cooling system and returns the warmer water to the ocean.

The analysis considers design, performance and economic requirements for a SWAC system, including thermal energy storage, a cold seawater inlet, a warm seawater outlet, a seawater pump excavated at a reasonable depth to allow a future increase in flowrate without cavitation, a heat exchanger and refrigeration systems or 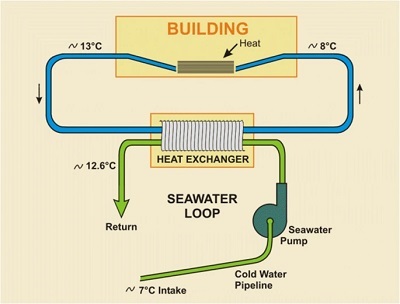 Diagram of a SWAC system heat exchanger. Source: Julian David Hunt et al.district cooling systems. A computational model was applied to estimate the cost of cooling with SWAC in different regions and to assess possible use of the technology as an alternative for energy storage from wind, solar and other variable renewable energy sources.

Just 1 m³ of seawater in a SWAC plant can provide the same cooling energy as that generated by 21 wind turbines or a solar power plant the size of 68 football fields. Higher initial investments incurred by SWAC versus conventional HVAC systems could be offset by lower operational costs. For some coastal areas and islands, cooling costs could fall by 77% of the normal cooling costs associated with conventional air-conditioning.

By posting a comment you confirm that you have read and accept our Posting Rules and Terms of Use.
Advertisement
RELATED ARTICLES
Cooling material is water repellent and pulls heat away from the body
The technology, benefits and applications of the Demandside Arctic Gator Cooling Systems
Freshwater Generator Cuts Power Consumption by Almost 70%
The economics of direct vs two-step water splitting
New cooling technology for electronics, data centers
Advertisement