While most earthquakes triggered by hydraulic fracturing (fracking) to extract fossil fuels go unnoticed because they are small and far from infrastructure, some cause noticeable shaking that can damage buildings.

The Eagle Ford shale formation in Texas has experienced some of the largest fracking-triggered earthquakes in the country. Geophysicists from Stanford University have simulated and mapped the risk of noticeable shaking and potential damage from this activity at all potential fracking sites across Eagle Ford. 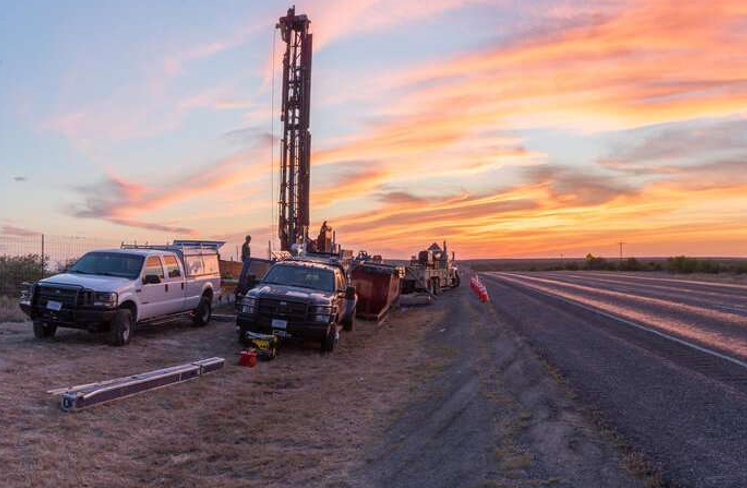 According to the study, the most densely populated areas are most likely to be at risk from shaking that is strong enough to be felt or cause damage. A strip of Eagle Ford between San Antonio and Houston is especially vulnerable. "We found that risks from nuisance or damage varies greatly across space, depending mostly on population density," said lead study author Ryan Schultz, a Ph.D. student in geophysics at Stanford.

Damaging earthquakes are rare, yet, the authors wrote, "the perceived risks of hydraulic fracturing have both caused public concern and impeded industry development." Tens of thousands of wells have been drilled in the past decade and contributed to a dramatic increase in earthquakes in the central and eastern U.S. since 2009.

Damage is unlikely in areas with a sparse population, even with magnitude 5.0 earthquakes, the researchers found, but powerful earthquakes caused by fracking could risk the “social license to operate.” This phrase from the 1990s mining industry that has since been adopted by climate activists refers to acceptance of communities and society that oil, gas and mining operations must be carried out without costly conflicts.

"Seismicity is part of the social license for hydraulic fracturing, but far from the only issue," said study co-author Bill Ellsworth, a geophysics research professor at Stanford's School of Earth, Energy & Environmental Sciences (Stanford Earth). Health threats posed by nearby oil and gas wells and greenhouse gas emissions from the production and use of fossil fuels are two additional serious concerns.

The goal of the research is to make it easier for stakeholders — local residents and property owners, operators and regulators — to discuss the risks that are important to them. "The approach we've developed provides the risk of nuisance or damage as a shared frame of reference and tools to evaluate it," said study co-author and geophysics professor Greg Beroza, co-director of the Stanford Center for Induced and Triggered Seismicity (SCITS).

Their risk analysis considers where people and structures are located along with forecasts for maximum earthquake magnitude and geological factors that amplify or dampen tremors underground. This approach allows for a starting point with some level of risk and calculates the largest earthquake magnitude that would keep the risk at or below that level. The analysis can be a starting point for using a traffic-light protocol to manage earthquake risk from fracking. A green light means operators can proceed while earthquakes remain small.

"If the goal is to treat everyone equally in terms of risk, our analysis shows action should be taken at lower magnitudes for drill sites near the cities in the north of the Eagle Ford than for those in rural areas in the south," explained Ellsworth, who is also a co-director of SCITS.

The researchers say setting a uniform threshold for the amount of shaking across a large formation is unfair. "Single valued thresholds can allow for thresholds that are too permissive in urban regions or too restrictive in rural regions," said Beroza, the Wayne Loel Professor at Stanford Earth. "Instead, if you start with a tolerance to risk, you can set thresholds that vary according to changes in the risk."

The study was published in the journal Science.

By posting a comment you confirm that you have read and accept our Posting Rules and Terms of Use.
Advertisement
RELATED ARTICLES
Are Small Earthquakes at Fracking Sites the Canaries in the Coal Mine?
Researchers discover new type of fracking-induced earthquake
Managing earthquake risk from oil and gas operations
Induced Earthquakes Rise with Oil and Gas Production
Carbon sequestration may be safer in old oil fields
Advertisement