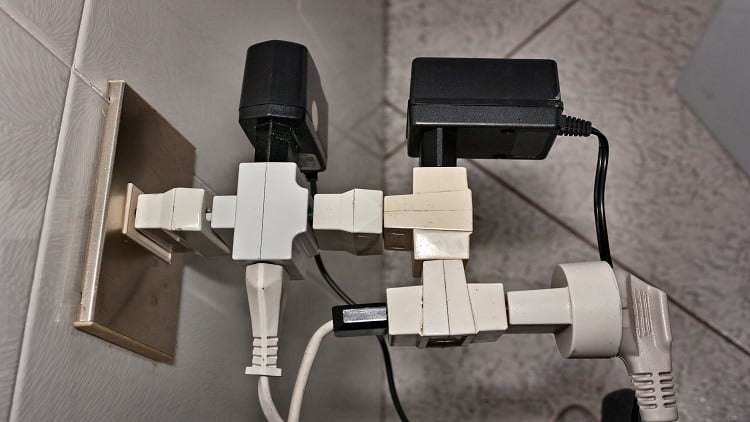 This is a common type of overload where there are too many electrical devices connected to an electrical outlet. Source: ermess/Adobe Stock

There are three main classifications of overcurrent: ground-fault, overload and short-circuit.

Ground-fault is known as a short-circuit condition, which is a high-magnitude fault overcurrent that places a low-resistance in parallel with the connected loads’ impedance. A ground-fault overcurrent typically only affects the grounded metal raceway/electrical distribution/utilization equipment enclosure and just one of the circuit conductors.

A ground-fault overcurrent occurs only if the electrical power distribution for the building or structure’s systems is referenced to Earth ground. Connecting the end of one or more windings of the single-phase AC transformer (wye transformer setup) to a grounding-electrode system, which creates ungrounded and grounded supply/circuit conductors, is known as “reference grounding.”

Overload overcurrent is quite simple; the clue is in the name. Any current that is more that the rate-load current is an overload, which occurs if an electrical circuit is directed to convey current that is greater than the load for which circuit conductors are rated. This can arise from the initial design of a circuit or by modifying an existing one.

For instance, a branch circuit with 20 A has an extra lamp added to it. This brings the load current up to 22 A in total, which results in an overload in the circuit.

An overload condition can happen in many places in a building’s electrical power-distribution system, such as at the feeder, branch-circuit level or service.

A short-circuit current, mentioned previously, is a fault overcurrent that is high-magnitude and typically involves an unintentional connection of two or more circuit conductors. This connection across the supply and return places a short-circuit over the supply-transformer’s winding.

Similarly, an AC three-phase electrical system will generally have an increased amount of short-circuit overcurrent, as the short usually involves more than one AC single-phase transformer winding.

Full overcurrent protection is only possible when the connected load and conductors can be provided with a circuit breaker or fuse at the point where the circuit begins, or where it gets the supply of power.

What are overcurrent protection devices and how do they work?

The three main sections that make up an electrical circuit are: a load, power and a means of connecting the two.

These main components are provided with a limit control and an ON/OFF control. Both control types can 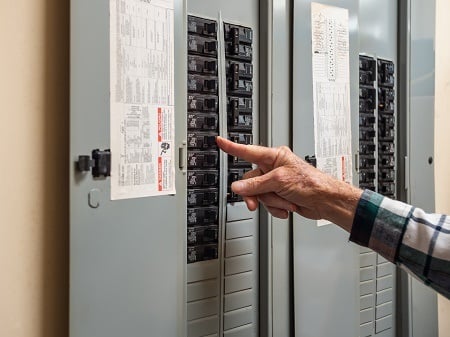 This is a common type of overload where there are too many electrical devices connected to an electrical outlet. Source: ermess/Adobe Stockcontrol the amount of current that flows in the circuit. The ON/OFF control is typically found in switch form and can be automatic, manual, electrical or electromechanical. The limit control is generally an OCPD where electrical power is distributed and it has a circuit breaker or fuse.

The electrical power system within a structure or building has three main classifications: the feeder circuits, the service and the branch circuits.

Following the same logic, the settings and rating of the OCPD along with the circuit conductors’ rated ampacity directly affect that maximum current at full load, which can be provided from the feeder, branch circuit or service. Any magnitude of current that is said to be more than the ampacity rating of the rated-load current or connecting wires of the building’s equipment, including motors, lights or transformers, is said to be an overcurrent.

The main aim of a circuit OCPD is to reduce or control the circuit conductors’ temperature to a value that will not cause damage to the conductors themselves or their insulation. This is accomplished by reducing the current that the conductors are intended to withstand. The protection of the circuit conductors from overheating has many applications and advantages, with one being the protection of the building’s electrical distribution and equipment from the results of overcurrent.

Now that you understand how overcurrent works and how to protect against various types of overcurrent, what is the best way of protecting against overcurrent? Detail your thoughts and experiences with overcurrent in the comments below!

By posting a comment you confirm that you have read and accept our Posting Rules and Terms of Use.
Advertisement
RELATED ARTICLES
An introduction to FHP motor starter switches
Single-Phase Transformers Information
Learn how to calculate and increase SCCRs
Scientists Develop New Approach for More Stable Power Generation
Allegro MicroSystems Releases a New Multi-outpost Automotive Power Management IC
Advertisement