NOAA: July 2019 was the warmest month ever 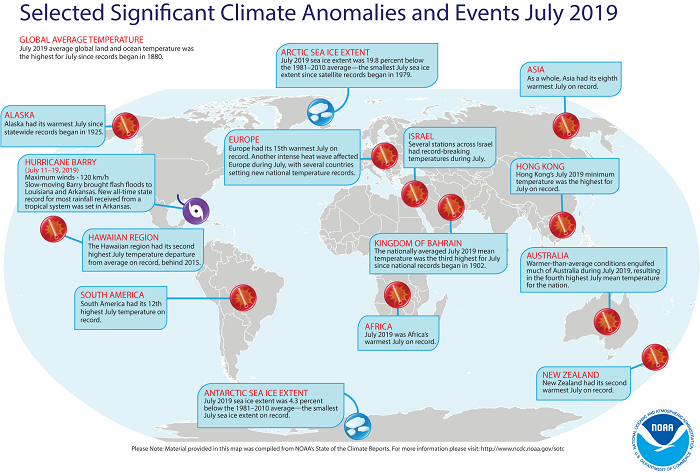 Did it feel unusually warm last month? The whole world did, according to the U.S. National Oceanic and Atmospheric Administration (NOAA). July 2019 was the warmest month in the 140-year NOAA global temperature dataset, which dates back to 1880.

The July 2019 temperature across global land and ocean surfaces was 1.7° F above the 20th century average of 60.4° F. The most marked warm temperature departures from average were experienced across Alaska, central Europe, northern and southwestern parts of Asia, and parts of Africa and Australia, where temperatures were at least 2.7° F above the 1981–2010 average or higher.

By posting a comment you confirm that you have read and accept our Posting Rules and Terms of Use.
Re: NOAA: July 2019 was the warmest month ever
#1

Not here - not by a long shot. Look closely at the map. Very few places had the warmest July ever. I seem to recall a very cold spring on the east coast this year. Anybody else remember that?

You don't have to set any records in order for the average or total effect to be "the highest". To dispute their findings I would suggest locating and reading the data upon which their conclusion is based.

"Some cool spots: Parts of Scandinavia and western and eastern Russia had temperatures at least 2.7 degrees F below average."