Like baseball pitchers, many motor users have found that changing speeds can be a winning strategy.

In a variety of industrial settings, the battle against high energy costs is being won by pairing motors with electronic devices known as variable frequency drives (VFDs). VFDs are used to control motor speed and torque by varying motor input frequency and voltage.

Placed between a motor and its power source, a VFD can slow the motor to a speed that matches the current needs of the application. This means the motor does not have to run at the top speed required by the application all the time, which reduces energy consumption.

Electronic variable speed drives can change a motor’s speed by varying its input frequency. Image credit: Yaskawa America “The simple fact is that when you use a VFD with a motor, you can save a lot on energy costs,” says Mark Harshman, director of technical business development for Siemens’ large drives business unit. Although VFDs are generally expensive pieces of equipment (costing anywhere from $100,000 to $2 million each), Harshman says they usually pay for themselves in energy savings in 18-24 months.

(Learn more about VFD products that are available.)

Before the emergence of VFDs, other methods were used to make adjustments to motor-driven processes. To reduce the flow of a pumped fluid, for example, a valve was used to partially close an opening through which the fluid was flowing. (Harshman likens this to using a finger to cover part of the opening at the end of a garden hose.) In these cases, Harshman says, the motor powering the process was still running at full speed, but some of the motor’s energy was creating pressure to overcome the valve action. The result was less flow through the smaller opening, but no energy savings.

By contrast, when the valve is left open and a VFD is used to change the motor speed in order to achieve the same end, “you save a huge amount of energy,” Harshman says.

Mechanical options such as gearboxes and belt-and-pulley arrangements also have been used to achieve variable speed. However, Perreault says, these devices can be expensive and also experience wear and tear that drives up overall system costs. In addition, electronic VFDs are more reliable than mechanical variable-speed options and also reduce system complexity.

According to Harshman, another benefit of using VFDs is that they shield motors from “inrush,” the large amount of current pulled by a starting motor not paired with a VFD. To lessen the harm caused by inrush, he says many industrial plants place limits on how many times large motors can be started each day. However, if plant personnel place a VFD between a motor and its power source, “it controls the power to the motor in a way that eliminates the inrush phenomenon,” he says. As a result, the motor is no longer stressed at startup, which extends its life and eliminates the need for limitations on the number of starts.

Currently, the list of common VFD applications includes pumps, fans, compressors, conveyors and elevators. Major markets for the devices include the energy, water and mining industries.

The number of VFD applications has grown over the last few decades, according to Perreault. To explain this, he cites the strides made by VFD manufacturers in improving device reliability. Several decades ago, electronic variable speed devices were prone to failure and generally did not last long. The technology has since matured and electronic variable speed is highly reliable, Perreault says, adding that users can expect the average VFD to last at least 10 years; 20-year service lives are not uncommon.

In addition to the hefty price tag, VFD complexity is a drawback. “It’s not always obvious how it works, so someone has to learn how to use it,” Harshman says. Complicating matters is the fact that it is a big piece of electronic equipment operating in areas where typically there are mostly mechanical engineers responsible for pumping and compressing operations. In many cases, “these are people who don’t really want to be drive experts,” he says. 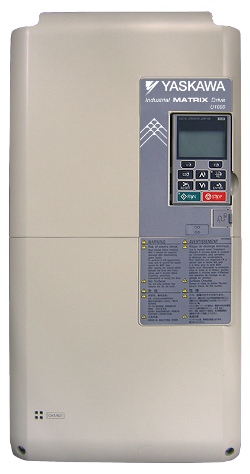 Yaskawa’s U1000 Industrial Matrix Drive is designed to cut harmonic distortion levels, reducing stress on the system power supply. Image credit: Yaskawa America Another drawback stems from the fact that VFDs change motor speed by sending voltage pulses to the motor. The output waveform, however, “is not exactly what the motor wants to see,” Perreault says. The waveform can have a harmful effect on motor windings if the distance between the motor and the drive is too large.

Manufacturers have improved their motors to address this issue, he says, but additional motor protection is still required if the distance between motor and drive is more than 500 feet. In these cases, capacitors and inductors are normally used to filter drive output.

Then there is the adverse impact VFDs can have on input-side components. Perreault says this is due to the fact that VFDs are typically nonlinear loads that produce harmonics in power lines. Harmonics are unwanted currents that can overload wiring and transformers, causing overheating and sometimes even fire.

However, the situation is only problematic when the load is large relative to the power source, he says. Components must be large enough all the way to the transformer to deal with the nonlinear load and also have harmonic-carrying capability.

Another way to attack the harmonics problem is to buy a low-harmonic VFD. Yaskawa, for example, sells a few products that reduce the amount of harmonics a drive produces on the input side, Perreault says. Low-harmonic options are more expensive than conventional VFDs, he says.

In addition to harmonics, a VFD gives off heat. So if the device is located in a room, the area must be air-conditioned, says Harshman. VFDs also take up space—sometimes lots of it. “These are not small pieces of equipment,” he says. A 500 hp drive might be 5½ feet long and 4 feet deep, he says, while a 15,000 hp drive could be 50 feet long and 6 feet deep.

VFD manufacturers have made considerable progress in terms of the equipment’s footprint, thanks mainly to technologies that have become available over the years. Harshman says that 20 years ago, his company’s 1000-hp Sinamics Perfect Harmony GH180 drive was almost 18 feet long and about 4 feet deep. Now, that same drive fits into a cubicle measuring 66 inches wide by 42 inches deep. Efforts to make VFDs still smaller will continue over the next 5-10 years, he says.

Manufacturers have also been trying to bring down VFD cost. At the same time, VFD buyers have been getting more for their money. For example, Harshman says that VFDs can now operate with a variety of motors (including synchronous and permanent magnet units) in addition to common induction motors. He also points to other significant VFD upgrades such as higher power density and easier operation, as wellthe addition of user-friendly control screens and wireless capability.

The situation is similar to that experienced by computer buyers over time. “The same thing you see in the computer industry,” Harshman says, where you get more power and performance relative to the cost, “is happening in the drives field.”

By posting a comment you confirm that you have read and accept our Posting Rules and Terms of Use.
Advertisement
RELATED ARTICLES
Regular maintenance and wiring inspection are crucial for VFD health and longevity
Understanding variable frequency drives and applications
Lowering Motor Speed with a Variable Speed Drive
Q&A: Water Customer Needs in the U.S.
Evolving HVAC Codes Likely to Expand VFD Use
Advertisement