Researchers from the Skolkovo Institute of Science and Technology (Skoltech) in Russia and the University of Texas at Austin have created a prototype wearable sensor for bandages to monitor wound healing without having to remove the bandages. 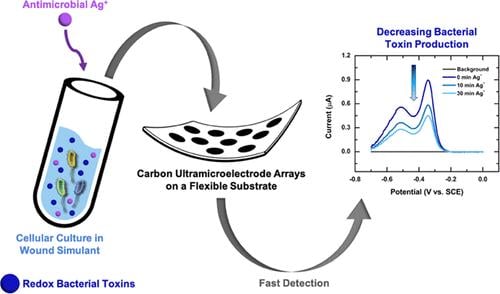 To determine the sensor’s effectiveness, researchers looked at the sensor’s sensitivity to biomarkers in a simulated wound environment. Specifically, the researchers looked at three biomarkers including pyocyanin, a byproduct of Pseudomonas aeruginosa, which is a bacterium that colonizes chronic wounds; nitric oxide, which is an indicator of bacterial infections in immune system cells; and uric acid, which is a metabolite associated with wound severity.

Because each of the three compounds is responsive to electrical activity — in other words, they are electroactive — they were detectable via electroanalytical sensors in the lab.

Currently, treatments for chronic wounds such as diabetic foot ulcers or pressure ulcers, which demand frequent monitoring to assess treatment needs, can range from frequent bandage changing to tissue biopsies, swabs and even pathogen tests. However, frequent bandage changes could be painful for the wearer and damage healing tissue. Additionally, tissue biopsies and pathogen tests mean frequent trips to the doctor in addition to invasive and expensive courses of treatment.

Following a series of successful tests in the lab, the researchers intend to test the smart bandages on human subjects in clinical settings.

The research appears in the journal ACS Sensors.