A new thermal storage material based on miscibility gap alloys (MGA) has been engineered at the University of Newcastle, Australia, to enable intermittent renewable energy sources to provide base load electricity to the grid.

At a cost of 10% of that of an equivalently sized lithium battery and longer lasting, the highly thermally conductive MGA blocks composed of non-toxic recycled material can easily be heated up to store energy and cooled to release it again as needed. By storing energy during peak production and releasing it to drive steam turbines, the 30 x 20 x 16 cm blocks can be deployed to retrofit coal-fired power plants without requiring grid infrastructure expansion or investment.

The blocks consist of a high conductivity matrix with phase change material dispersed as particles. The matrix holds everything in shape and rapidly distributes heat, keeping the particles in place as they melt when heat is applied. Thermal energy is stored through the solid to liquid phase change and the energy is released as the material cools.

The researchers envision stacking MGA blocks into insulated storage tanks to store energy for use in a range of applications, such as improving electrical grid stability, residential and commercial space heating, industrial process/waste heat and electric vehicles. The primary goal remains enabling intermittent renewable energy sources such as solar and wind energy to provide base load electricity to the grid. 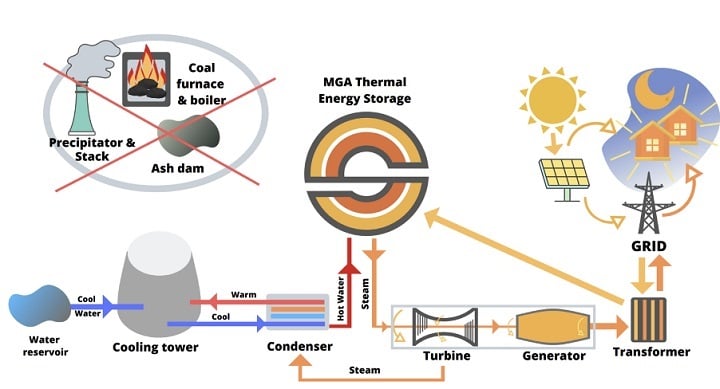 By posting a comment you confirm that you have read and accept our Posting Rules and Terms of Use.
Re: Video: Thermal storage blocks could be key to clean grid power
#1

This certainly seems like a great engineering breakthrough especially if these storage units can be made for 1/10th. the cost of lithium battery packs.

Can the material be used in the design of future domestic storage radiators? - that would make it really interesting for folks who have both solar pv and all-electric homes.