Researchers from the Washington University School of Medicine created a phone app to help college students monitor and receive treatment for eating disorders. According to the team, 13% of college-aged women and 3.6% of college-aged men have an eating disorder, but only 20% actually receive treatment. The team teamed up with a private company, Lantern, to develop the phone-based therapy app.

College students don’t have the time to keep up with traditional therapy methods and colleges are not always well equipped with proper mental health services. The new phone-based app delivers a form of cognitive-behavioral therapy to help overcome and treat eating disorders within the student’s schedule. 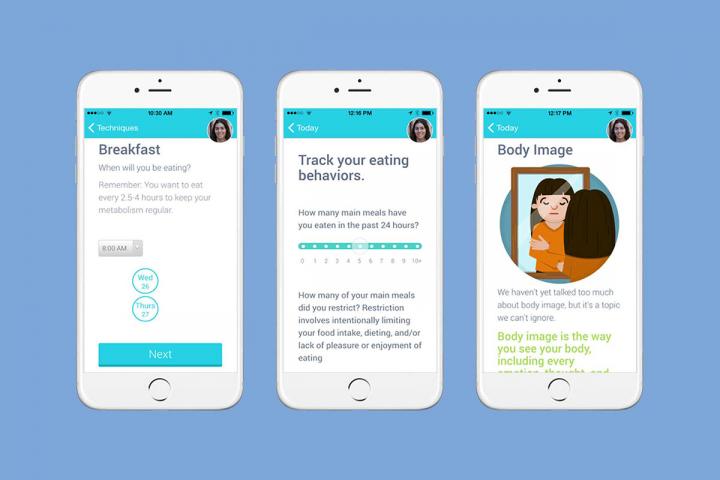 Shown are examples of how participants engage with the app.Source: Washington University Center for Healthy Weight and Wellness

Before the study, participants completed a questionnaire were evaluated if they are at risk for an eating disorder or bulimia nervosa. They did not include anorexia because those patients would benefit from a different kind of treatment.

To gather the participants, the team screened 4,894 women from 27 U.S. colleges. Of those women, 914 were eligible for the study and 690 agreed to participate.

Women in the app group had access to content that was designed to help, challenge and change the unhelpful ways of thinking and behaving that are associated with an eating disorder. Along with the app, participants also had access to a coach that sent texts to help the participants stay motivated and use concepts from the app in their daily life.

App therapy was broken into a series of 40 10-minute long therapy sessions. The team found that a large number of smaller sessions would increase user engagement. App users had access to a phone call with therapy coaches at the start and the end of the study.

Women reported that the app reduced their symptoms. They were able to engage with therapy on their own schedule, which encouraged them to attend sessions. Students were more likely to use the app than pursue therapy and follow up with in-person counseling.

This study was published in JAMA Network Open.

By posting a comment you confirm that you have read and accept our Posting Rules and Terms of Use.
Advertisement
RELATED ARTICLES
Video Game App May Help Combat Depression
Using Technology to Quit Smoking
Biomedical Engineers Create Painless Method for Anemia Testing
App Could Help OCD Patients Control Their Symptoms and Impulses
An App to Aid Stranded Dolphins, Whales
Advertisement