In developing durable goods, design engineers have to meet many demands. Their primary objective is to ensure that the product functions, often followed by a secondary focus on time to market. With other goals such as cost, reliability and serviceability jockeying for attention, engineers may underestimate or overlook the necessity of making their design as manufacturable as possible.

One important goal of DFM is to minimize total cost. That means reducing costs in every area from administrative overhead to tooling, and not just the usual cost metric of parts and labor. Manufacturers that rely heavily on this limited view of cost and apply pressure to lower that cost may make poor decisions such as specifying or changing to cheaper parts or low-bid suppliers, he says.

Such measures can lead to lower quality and reliability and could reach a point where quality costs more than the anticipated savings. Quality-related costs may include reworking defective products, addressing warranty issues, issuing recalls and defending against potential liability-related claims.

Another key aspect to DFM is minimizing the time to stable production—a more meaningful parameter than time to market, he says. When a company defines time to market as time to release or ramp, for example, design engineers may feel the crunch and risk sending drawings to manufacturing with little thought given to the product’s manufacturability.

Anderson estimates that time and budget pressures “will delay the time when the product can be sold, often with 70% of the timeline spent on revisions, iterations and slow ramps.”

Additionally, DFM can improve product quality in a number of ways. One of its biggest benefits relates to simplification and standardization, which minimize the number of active parts in a product design. By using fewer parts and standardizing components, product makers significantly reduce the likelihood of manufacturing defects or incorrect assembly, says Ken Crow of DRM Associates, which provides consulting and training for new product development.

The same goes for guidelines that aim to reduce product and material handling during the manufacturing process. By considering the orientation, insertion, location and fastening of parts, as well as self-fixturing and self-locating features, engineers can reduce or avoid the need for tools or fixtures, he says. In turn, the cost of manufacturing decreases, sometimes significantly.

Another way to improve quality is by designing a product with the tolerance and other capabilities of the manufacturing equipment in mind. In doing so, engineers can design products with realistic tolerances or determine early in the design process that the manufacturer will have to find new equipment or suppliers with the proper proficiencies, Crow says.

Manufacturers curious about how much DFM can impact their bottom lines need look no farther than the F-35 Joint Strike Fighter program, the U.S. Department of Defense’s (DOD) next-generation of strike aircraft weapon systems. In a milestone for the fighter, the U.S. Marine Corps in late July said the F-35B jump-jet model had achieved initial operational capability. This means that the Marines now consider the B model — one of three designs — to be an active plane and capable of performing in all of its operations. 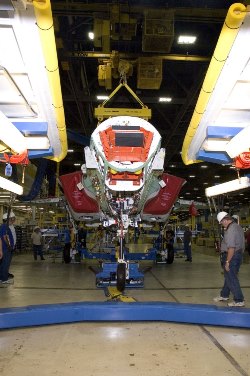 F-35 on the assembly line. Manufacturing challenges arise in a plane with 300,000 parts. Image source: Lockheed Martin“Many of the fighter jets are still made by hand, and there are a lot of drill motors working and folks in contorted positions as they assemble the aircraft,” says Debbie Holton, director of industry strategy and events for the manufacturing industry trade association SME. In an airplane with 300,000 such parts, that creates manufacturing challenges, she says.

Given the order for some 2,400 fighter planes and the rate at which they needed to be produced, the project’s contractors knew they couldn’t manufacture the aircraft in the traditional way. Taking cues from the highly automated automotive industry, the Aerospace Automation Consortium (AAC) with assistance from SME explored a variety of DFM concepts. These concepts included determinate assembly, in which holes are predrilled, as well as using a moving assembly line.

When the DOD designed the F-35, performance was the top priority. Says Holton: “They were thinking about going Mach 1, landing vertically and coming off of aircraft carriers.” Design for manufacturability was secondary.

Applying automation and DFM principles yielded “that balance between the performance and the ability to actually manufacture the product within a certain cost, time and constraints as well,” Holton says.

The success of DFM hinges on the collaboration between design and manufacturing groups. In DFM, multifunctional teams concurrently engineer products and production processes. That stands in contrast to the traditional approach of the engineer “throwing designs over the wall” to manufacturing and procurement after designing the product, Anderson says. 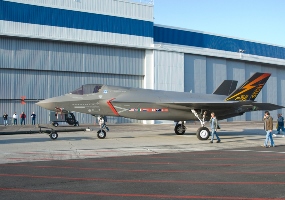 F-35 rollout. The Defense Department emphasized speed, vertical landing and aircraft carrier launches; design for manufacturability was secondary. Image source: Lockheed MartinThe relationship needs to start during the concept development phase. Crow suggests that the product development team conduct a review to examine similar products with similar processes, or earlier-generation versions of products, to identify their pitfalls and avoid them in designing and manufacturing the new products.

Crow also encourages the use of tools such as 3D CAD assembly models to help everyone on the team understand the product’s design intent. However, he cautions against solely relying on software designed for DFM. That is because if users do not understand DFM’s basic principles, the software alone would not solve the problem.

Collaboration extends beyond the factory walls to include partnerships with vendors. Anderson says that preselected vendors help a manufacturer enhance the part or tooling design for manufacturability. Meanwhile, developing designs in isolation and passing them on to an uninvolved low bidder could result in quality and cost troubles down the line.

Achieving DFM through supply chain collaboration can be more difficult in today’s global manufacturing environment. Offshoring from North America to Asia, for instance, makes concurrent engineering a challenge because the continents are not working at the same time. Too often, drawings are simply sent to contract manufacturers, who then build the product based on the design alone. Anderson calls it a risky practice that requires the design prints to be “100% complete, 100% accurate and unambiguous.”

Insufficient resource prioritization presents another hurdle for DFM. Trying to develop a product for all markets while meeting the custom requirements suggested by the sales team can make DFM impossible.

Above all, Crow recommends that manufacturers formally address DFM in design reviews so they can “make explicit decisions whether the product either achieves a significant or sufficient level of manufacturability, or if there are any significant manufacturing risks.”

DFM for the Future

DFM relies on a balance between a product’s design features and manufacturing processes and technologies. SME’s Holton says that the partnership necessary for DFM will become more common as the next generation of design and manufacturing engineers emerges. Millennials “are used to group projects and a lot more collaboration,” she says.

Holton also hears chatter about a potential new class of engineers known as “producibility engineers.” This professional “understands the design and manufacturing process and looks at the whole picture of producibility,” she says.

The march toward designing for manufacturability is gaining momentum as more organizations realize the tangible benefits of designing low-cost products, improving quality and optimizing manufacturing functions through collaboration. Furthermore, young design engineers are ushering in a new era of work style; multidisciplinary alliances such as those used in DFM may well flourish.

By posting a comment you confirm that you have read and accept our Posting Rules and Terms of Use.
Advertisement
RELATED ARTICLES
DFM Strategies Save Time and Money
Design for joining and assembly: Part 1
How Precision Metal Stampers Use 3D Simulation Software to Design Tooling
Advantages to Using Ion Beam Milling Vs. Chemical Etching
Foundry Offers Tips on Depositing Thin Film on Polyimide to Create Disruptive MicroFlex™ Circuits
Advertisement