Chevron Corp. said it sanctioned the deepwater high-pressure Anchor project in the U.S. Gulf of Mexico.

New technology to be deployed there is expected to withstand up to 20,000 pounds per square inch (psi) of pressure, enabling future access to other high-pressure resources in the Gulf.

Deepwater wells typically operate at a limit of 15,000 psi, but Anchor is at the 20,000 psi level. Two technologies for the high-pressure reservoirs are thicker steel to be used in construction and equipment to handle higher hook loads.

Chevron said that it has reduced development costs by nearly a third compared to its earlier generation of greenfield deepwater investments. The company is cutting costs by standardizing equipment, using fit-for-purpose surface facilities and adopting so-called "drill-to-fill" strategies. Chevron said that for the Anchor project, it streamlined front-end engineering and design and is relying more on industry standards in its designs and equipment.

In related news, Chevron also announced the write-down of between $10 billion and $11 billion for the fourth quarter as the company revalued some of its assets, including shale gas production in Appalachia and deep-water projects in the Gulf of Mexico. The company indicated it could sell some of its natural gas projects as prices for the commodity remain challenged by oversupply. 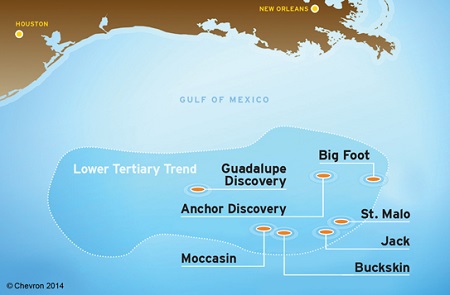 Location of the Anchor field. Source: ChevronThe Anchor Field is located in the Green Canyon area, some 140 miles (225 km) off the coast of Louisiana, in water depths of around 5,000 ft (1,524 m). Initial development will require an investment on the order of $5.7 billion. Stage 1 consists of a seven-well subsea development and semi-submersible floating production units. First oil is expected in 2024.

By posting a comment you confirm that you have read and accept our Posting Rules and Terms of Use.
Re: Chevron approves $5.7 billion high-pressure deepwater project
#1

DEEP FRACKING is the death knell of earth as we know it. Besides escape of deep and widespread pollutants, which someday will permeate (mechanical systems will ultimately fail), and in addition to immediate impacts, a cumulative geological breakdown will culminate eventually. That we will deplete resources relatively soon too, notwithstanding.

In one massive (600mi x 250mi x 75mi, e.g.) formation, fractured throughout, 15 trillion cubic feet of gas can be taken over 15 years, oil notwithstanding.. and virtually worldwide. No consideration is given regarding the crustal and tectonic implications of such vast concentrations of gas that if taken out of earths crust whole without the oil, would float in atmosphere like an island, or a dirigible. In earth, under pressure, all this buoyancy under the Gulf of Mexico, e.g., is most certainly significant to the stability of the upper crust.

We are beginning to fundamentally alter the foundational geology of earth.